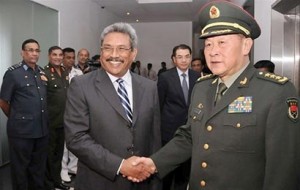 During these discussions the two countries also signed an agreement to establish two committees that would work towards a free-trade agreement.

The Chinese government will also aid Sri Lanka in developing a Colombo-Kandy-Kurunegala expressway and extending the southern expressway from Galle to Kataragama.

During the bilateral meeting, the two delegations also discussed trade and tourism. The two countries signed an agreement to establish two committees that would work towards a free trade agreement. This would give Sri Lankan products such as apparels, gems and jewellery, tea and rubber wider access in the Chinese market.

In the area of tourism, Sri Lanka and China agreed to work towards the goal of attracting 100,000 Chinese tourist arrivals to Sri Lanka by 2015.

China has also pledged support for a number of other projects: Water supply schemes in Attanagalla, Minuwangoda and Kurunegala, an international conference hall in Kandy, an arts theater in Anuradhapura and the development of the national hospitals in Colombo and Ragama.