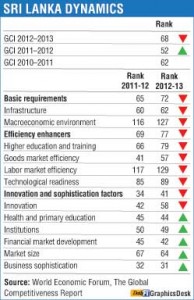 Sri Lankaâ€™s rank of 68th place out of 144 countries surveyed from 52nd place in the previous year was despite the overall score changing marginally to 4.2 points from 4.3. WEF assess a countryâ€™s competitiveness using 12 broad pillars â€“ institutions, infrastructure, macro-economic environment, health and primary education, higher education and training, goods market efficiency, labour market efficiency, financial market development, technological readiness, market size, business sophistication and innovation. Sri Lanka suffered dip in seven of the 12 pillars. In the 2010/11 rankings Sri Lanka was placed at 62 and the jump last year to 52nd place was showcased by the Government as an endorsement as well as reflective of its sound macro-economic management, development and policies. As per the WEFâ€™s analysis, it is the deterioration in the macro-economic environment that had led to the downgrade in the latest ranking. On macro-economic environment, Sri Lankaâ€™s rank was 127, down from 116 last year. The other notable decline was in labour market efficiency, with Sri Lanka placed at 129 in latest ranking as opposed to 117 in the previous year. Under macro-economic environment issues factored in are government budget balance, gross national savings, inflation, interest rate spread, government debt and country credit rating.Â  Under labour market efficiency factors considered are cooperation in labour-employee relations, flexibility of wage determination, rigidity of employment index, hiring and firing practices, redundancy costs, pay and productivity, reliance on professional management, brain drain and women in labour force. As per WEFâ€™s latest rankings, Switzerland was placed as the worldâ€™s most competitive economy for the fourth year running, while the United States continued a four-year slide down the table. The study by the WEF, best known for running the annual meeting of world business leaders at the ski resort of Davos, ranks 144 countries by examining 113 indicators culled from official data sources and a poll of 15,000 executives who opine on the country where they do business. Singapore remains in second position and Finland in third position, overtaking Sweden (4th). These and other Northern and Western European countries dominate the top 10 with the Netherlands (5th), Germany (6th) and United Kingdom (8th). The United States (7th), Hong Kong (9th) and Japan (10th) complete the ranking of the top 10 most competitive economies. The large emerging market economies (BRICS) display different performances. Despite a slight decline in the rankings of three places, the Peopleâ€™s Republic of China (29th) continues to lead the group. Of the others, only Brazil (48th) moves up this year, with South Africa (52nd), India (59th) and Russia (67th) experiencing small declines in rankings. Despite growing its overall competitiveness score, the United States continues its decline for the fourth year in a row, falling two more places to seventh position. In addition to the burgeoning macroeconomic vulnerabilities, some aspects of the countryâ€™s institutional environment continue to raise concern among business leaders, particularly the low public trust in politicians and a perceived lack of government efficiency. On a more positive note, the country still remains a global innovation powerhouse and its markets work efficiently. The report indicates that Switzerland and countries in Northern Europe have been consolidating their strong competitiveness positions since the financial and economic downturn in 2008. On the other hand, countries in Southern Europe, i.e. Portugal (49th), Spain (36th), Italy (42nd) and particularly Greece (96th) continue to suffer from competitiveness weaknesses in terms of macroeconomic imbalances, poor access to financing, rigid labour markets and an innovation deficit. Behind Singapore, several Asian economies are performing strongly, with Hong Kong SAR (9th), Japan (10th), Taiwan, China (13th) and the Republic of Korea (19th) all in the top 20. Vietnam ranks 75th this year and switches positions with the Philippines. Over the last two editions, Vietnam has lost 16 places and is now the second-lowest ranked among eight members of the Association of Southeast Asian Nations (ASEAN) covered by the Report. The country loses ground in nine of the 12 pillars of the GCI. It ranks below 50th in all of the pillars, and dangerously close to the 100th position on a majority of them. In the Middle East and North Africa, Qatar (11th) leads the region while Saudi Arabia remains among the top 20 (18th). The United Arab Emirates (24th) improves its performance while Kuwait (37th) slightly declines. Morocco (70th) and Jordan (63rd) improve slightly. In sub-Saharan Africa, South Africa (52nd) and Mauritius (54th) feature in the top half of the rankings. However, most countries in the region continue to require efforts across the board to improve their competitiveness. In Latin America, Chile (33rd) retains the lead and a number of countries see their competitiveness improve, such as Panama (40th), Brazil (48th), Mexico (53rd) and Peru (61st). Read more highlights of the report. â€œPersisting divides in competitiveness across regions and within regions, particularly in Europe, are at the origin of the turbulence we are experiencing today, and this is jeopardising our future prosperity,â€ said Klaus Schwab, Founder and Executive Chairman, World Economic Forum. â€œWe urge governments to act decisively by adopting long-term measures to enhance competitiveness and return the world to a sustainable growth path.â€ Xavier Sala-i-Martin, Professor of Economics, Columbia University, USA, said: â€œThe Global Competitiveness Index provides a window on the long-term trends that are shaping the competitiveness of the worldâ€™s economies. In this light, we believe it offers useful insight into the key areas where countries must act if they are to optimise the productivity that will determine their economic future.â€ (Daily FT)]]>