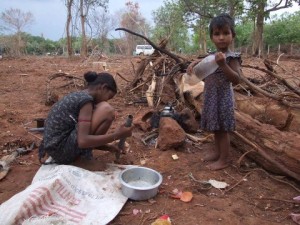 The Sunday Leader journalist and the photographer who were in Mullathivu last Wednesday and Thursday were stopped from entering the Suriyapuram camp in Nanthikadal by the Sri Lankan army officers on guard.

This was the camp where the last batch of IDPs from the Manik Farm was brought to although the Lankan government claimed they were re-settled in their villages.

Not only did they stop journalist from entering the Suriyapuram camp, they threatened us not to write anything detrimental to them.

One of the SLA army officers who were inside the makeshift camp shouted at this reporter to leave the area immediately and wanted not to write anything against the camp and the IDP grievances but to â€˜mind her businessâ€™.

â€œYou people are paid by the NGOs and whatever they ask, you are prepared to dance to their tunes.

Journalists job is the worst found in Sri Lanka. They are trying to make a living from reporting detrimental issues, which is not right,â€ he said.

Seeing as to how this army officer was shouting at his colleague, Thusitha- the photographer took out his camera and captured a few photographs of this un-controllable group.

Realizing well that they were now on record, more than 15 army personnel surrounded Thusitha, some with assault rifles pointing at him.Â  He was manhandled by them. They even attempted to pull his camera. However Thusitha was brave enough to stand by his feet shouting â€˜if my camera is taken I will give wide publicity to this harassment over the independent media and see what will happen next,â€ he said.

Even the driver of our vehicle was not spared. He was not allowed to turn the vehicle to go back but forced to reverse to the main road which was quite a long distance. Meanwhile Thusitha deleted the pictures which he captured in front of these army men. Meanwhile they wanted him to delete the pictures he had taken earlier, which he did not heed.