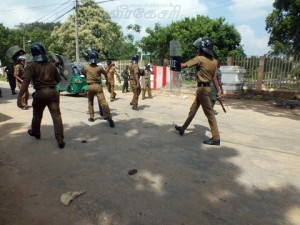 On Wednesday, more than 200 university students were protested in front of the University and the protestors wanted that the international community or United nation to intervene to stop the military harassment of Tamils in the Jaffna area. When the peaceful protest was held in the Parameswara junction, about 200 metres from the university Sri Lankan troops opened fire then rushed the crowd, beating students with their rifle butts. More than 10 students were injured and many more arrested by Sri Lankan forces. Reporters for the Tamil newspapers were also assaulted, Jaffna sources said. Yesterday, the Jaffna university Tamil students were brutally assaulted by the occupying Sri Lanka military on Tuesday, a few minutes after the students remembered their war dead. The Sri Lankan army stormed into the university premises and prevented the students from continuing with the commemorative events then students were brutally assaulted by the Sri Lanka military. 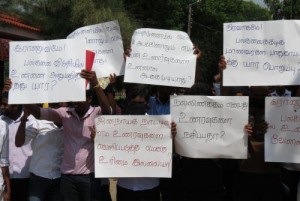