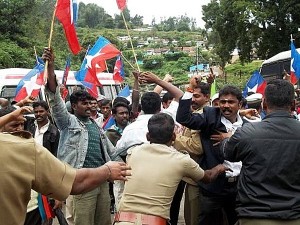 A group Â of 70 Sri Lankan Sinhala tourists, who were visiting the Velankanni church in Nagappattinam on Sunday, had to return on police advice after they met with some opposition on the way, the Times of India reported yesterday. At least seven monks were in the group.

The group was heading towards the Velankanni church in two buses on Sunday morning when localÂ Tamil groups stopped them at Needamangalam in Tiruvarur district. The visitors had all the requisite papers from immigration officials, but Tiruvarur police sent them back as they thought the group could provoke law and order problems in the region.

â€œThe Sri Lankan groups usually hire 37-seater Volvo air-conditioned buses from Chennai. They become easy targets as they can be identified by their dialect and clothing.â€

In September last year, Sri Lankan pilgrims, who came in two buses, were attacked in Thanjavur. â€œIf they come in twos and threes, there wonâ€™t be any problem, but when they hire a/c buses, they are easily identifiedfor special treatment,â€ said another officer.

Trichy police said that these tourists â€œare not in the Trichy police jurisdiction,â€ and it did not matter to them as to wherever they were headed for. It is believed they are in still in Tamil Nadu as they could not be accommodated on the return flights ahead of their schedule. Furthermore, the police prudently floated a rumour that the pilgrims are sent back from Trichy region, so that the local groups inimical to the Sri Lankans here would not take undue advantage of them.

Usually, Sinhala tourists visit the Sri Lanka Maha Bodhi Centre at Egmore before going to Buddist shrines such as Gaya and Sarnath. These pilgrims prefer Trichy, as it is convenient to visit the nearby tourist centres like Sri Ranganathaswamy temple, Brihadheeswara temple in Thanjavur and Samayapuram Maha Mariamman temple.