The Sri Lankan government confirmed it would raise defence spending by over 11.5% , over 3 years since the end of the conflict. 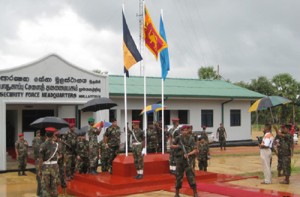 The Sri Lankan defence secretary Gotabhaya Rajapaksaâ€™s fiefdom is to get Rs.290 billion out of a total estimated government expenditure of Rs.2520 billion â€“ i.e. 11.5%.

Health and Education will not get even half as much.

According to the military sources, nearly half of the defence budget will be spent on maintaining the nearly 300,000 strong forces.

Sri Lanka, which maintains one of the largest armies in the world, spend over 11.5% of theirÂ spending on their military, a higher percentage spend than Chinaâ€™s or the United Kingdomâ€™s.

The Sri Lankan military is mainly deployed in the North-East of the island, where they have been accused of extra-judicial killings, rape and occupying large tracts of Tamil civilian land, with the rightful owners still displaced in makeshift camps.

Sri Lankaâ€™s armed forces are accused of committing horrendous war crimes against Tamils during the final phase of the armed conflict, with not a single soldier charged with a crime.