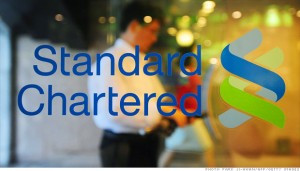 Standard Chartered has fended off threats by a New York regulator to revoke its banking licence for alleged breaches of US sanctions. Chief executive Peter Sands is however under intense pressure after the bank agreed to pay $340m (Â£220m) despite insisting that it had committed only minor breaches of the rules.

Barely 24 hours before the bank was due to attend a hearing with the New York department of financial services (DFS), the regulator announced the surprise settlement which also includes the installation a monitor for at least two years to evaluate the bank’s risk controls. Inspectors from the DFS will be installed at the bank’s office in New York and the bank will “permanently install personnel” in New York solely to ensure that it adheres to money laundering laws.

Benjamin Lawsky, head of the DFS, who stunned Standard Chartered last week with damning allegations of sanctions breaches, had summoned the bank to appear at a hearing in New York at 10am local time on Wednesday. But the showdown was adjourned following the settlement, which was announced after the London market hadÂ  closed.

Lawsky claims that Standard Chartered schemed to hide 60,000 transactions valued at about $250bn (Â£160bn) which breached sanctions with Iran. Sands admitted to only 300 breaches, with a much smaller value of about $14m.

Lawsky had said that he could withdraw the bank’s licence but has now dropped the threat, which analysts said could protect the share price on Wednesday. However, his statement announcing the settlement insisted that both sides had agreed that the “conduct at issue” covered $250bn â€“ the full amount of his original order.

The fine is considerably larger than the $5m that the bank had argued its breaches should merit â€“ although it may still rise as the DFS is only one of a number of authorities which has been investigating possible breaches. These include the Department of Justice and the Office of Foreign Assets Control (Ofac). Standard Chartered has admitted since 2010 that it has been discussing potential sanctions breaches.

But the bank was unprepared for the decision by the DFS to publish its allegations while Sands was on holiday with his family. Investors’ fears that it could be stripped of its New York licence and possible resignations at the top of the bank sliced almost 25% off the bank’s share price. The shares have been recovering, ending on Tuesday at Â£13.70, nearly 3% higher, but still below the Â£16 levels from last week.

A Standard Chartered spokesman told Reuters last night the settlement was “a pragmatic decision in the best interest of shareholders and customers”.

The loss of its banking licence would be more damaging than the fine, although Sands on Tuesday told the Business Standard paper in India â€“ where the bank has a high street banking operation â€“ that he did not believe the bank would be stripped of its ability to conduct business directly in the US.

Ian Gordon, banks analyst at Investec, said: “It has taken the nuclear option off the table and suggests the total settlement will be manageable.”

Lawsky also hit out against accountants Deloitte, which he said had drafted a “watered-down version” of a report on the potential Iranian sanction breaches for Standard Chartered.

Joe Echevarria, chief executive of Deloitte, told Reuters that the allegations were “distortions of the facts”. “It’s an unfortunate choice of words that was pulled out of context,” he said. (The Guardian).