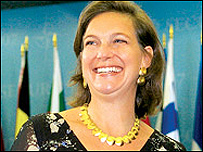 U.S State Department Spokesperson Victoria Nuland, on Friday, said that the U.S also noted with concern recent threats to Sri Lankan judicial officials, including the assault last month on a judge who had publicly criticized government pressure on members of the judiciary.

â€œWe urge the Government of Sri Lanka to avoid any action that would impede the efficacy and independence of Sri Lankaâ€™s judiciary. The United States, along with our partners in the international community, continues to urge Sri Lanka to address outstanding issues of the rule of law, democratic governance, accountability and reconciliation,â€ Nuland said.

The U.S also raised concerns during the Universal Periodic Review (UPR) in Geneva last week over moves to impeach the Chief Justice.