There is tension in pockets of Madurai district in Tamil Nadu after two statues of Ambedkar were found vandalised early this morning. A statue of another local Dalit leader Immanuel Sekaran too was found damaged. 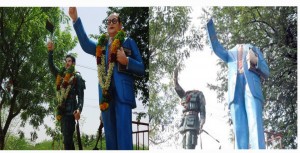 Dalit groups blocked roads at a few places and are on a relay hunger strike demanding the arrest of culprits.

Tamil Nadu, Madurai Police have formed four teams to nab those responsible for the attack. They’ve set up pickets around all the statues of community leaders across southern Tamil Nadu.

In the late nineties, desecration and damage to statues of Dalit leaders led to bloody communal clashes in which scores of people were killed.

Last month, second statue of Mahatma Gandhi was vandalised in Sri Lanka by the Sri Lankan military in the Army-controlled Jaffna, Sri Lanka. A few months ago, a statue of Gandhi was â€˜beheadedâ€™ in the Eastern Province town of Batticaloa.