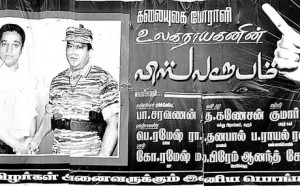 LTTE leader Vellupillai Prabakaran has created a stir in Tamil Nadu. The picture has been included in posters pasted in parts of Trichi on Kamal Hassan’s new movie Vishvaruban, Colombo media reports. According to the Tamil media, the poster also calls the popular Indian actor a fighter in the arts world. Vishwaroopam is a Tamil-Hindi bilingual Indian spy thriller film written, directed and co-produced by Kamal Haasan that features himself in the lead role. The film, also has Pooja Kumar, Rahul Bose, Andrea Jeremiah and Jaideep Ahlawat in supporting roles. The film was shot with the same cast in both languages simultaneously, and is titled in Hindi as Vishwaroop. Vishwaroopam will be first of its kind to release on DTH platforms.]]>