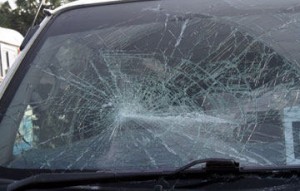 A vehicle of leaders of the Movement for Equal Rights has come under a stone attack near the Jaffna Fort as they had been collecting signatures for a petition that calls for the freedom of university students presently under detention, Colombo media reports. Its convener Ravindra Mudalige said around 8.45 am today (Jan. 15), four men in two motorcycles threw stones at the vehicle and fled. The vehicle’s front glass pane has been damaged. Alleging the military was behind the attack, he said one of the motorcycles had the number JY 2177.]]>