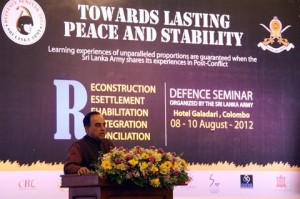 Indiaâ€™s Janatha Party Leader and anti Tamil activist Dr. Subramanian Swamy said that the victory over the LTTE in Sri Lanka is fit for being honoured by Indiaâ€™s highest award in the future

Â Speaking at the Sri Lankan Defence Seminar in Colombo today, Dr. Swamy said â€œthe credit for this victory over Tamils naturally must belong to the political leadership of the President Mr. Rajapakshe and his ability to inspire the armed forces to fight on and die for the cause.â€

But Sri Lankaâ€™s decisive 2008-09 military offensive against the LTTE may have resulted in the deaths of as many as 40,000 civilians, most of them victims of indiscriminate shelling by Sri Lankan forces, according to a U.N. panel established by Secretary General Ban Ki-moon.

A U.N. report released last year said government troops deliberately shelled civilians and hospitals and blocked food to people trapped in the war zone. It said tens of thousands of civilians may have been killed in the final months of the conflict.

A Sri Lankan army officerÂ told to the Channel-4Â that the soldiers as a licence to kill Tamils. He described how he had watched as Sri Lankan forces shot dead unarmed Tamil women and children. It is the first time this allegation has been made.

They shot people at random. Stabbed people. Raped them. Cut out their tongues, cut women’s breasts off. I saw people soaked in blood, he added.

However, Swamy wants Indiaâ€™s highest award for these war criminals.