Syrian defence minister General Daoud Rajha died in a suicide attack in Damascus on Wednesday, as raging battles across the capital upped the stakes ahead of a Security Council vote on the Syria crisis.

State television said a suicide bomber targeted a meeting of ministers and security officials at the National Security headquarters in Rawda, a high security district in the heart of the capital, killing Rajha. 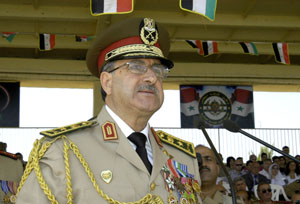 Security officials told AFP that several other participants in the meeting were wounded in the blast and taken to Al-Shami hospital in the capital for treatment.

The officials said Interior Minister Mohammed al-Shaar was among the wounded.

Rajha, a Christian, was defence minister, deputy army chief and deputy of the Council of Ministers. Syria’s army chief is President Bashar al-Assad.

The National Security branch — a key part of the country’s security apparatus — is headed by General Hisham Ikhtiyar. There was no immediate news of Ikhtiyar’s fate after the bombing.

The attack came as battles raged across Damascus and after the Free Syrian Army (FSA) — comprising defected soldiers and civilians who have taken up arms against Assad’s forces — warned the regime to “expect surprises.”Columns of black smoke rose over the capital, with the Local Coordination Committees, which organises anti-regime protests on the ground, reporting that Qaboon and Barzeh neighbourhoods were bombarded by loyalist forces.

It also said there was less traffic than normal in the city where fighting has raged since Sunday, with the rebels announcing a full-scale offensive dubbed “the Damascus volcano and earthquakes of Syria.”Regime forces and the FSA clashed in the Al-Midan and Zahira districts of Damascus as well as at Assali south of the city, the LCC said.

Rebel forces on Tuesday said the battle to “liberate” Damascus had begun, as heavy fighting raged with the regime using helicopter gunships in the capital for the first time.

As the fighting inched closer to the regime’s nerve centre, FSA spokesman Colonel Kassem Saadeddine said “victory is nigh” and the struggle would go on until the city was conquered.

“We have transferred the battle from Damascus province to the capital. We have a clear plan to control the whole of Damascus. We only have light weapons, but it’s enough.””Expect surprises,” Saadeddine added.

An army officer in Damascus, however, told AFP on Tuesday that troops have “the situation under control” and were “chasing the terrorists seeking refuge in apartments and mosques.”The source said “battles raged” in Qaboon, “where the majority of rebels were,” adding that “33 terrorists were killed, 15 were wounded and 145 were arrested,” referring to rebels.

In Beijing, UN chief Ban Ki-moon on Wednesday urged the Security Council to act to stop the bloodshed in Syria, after holding talks with Chinese leaders hours ahead of a vote on fresh sanctions.

Ban said the Security Council must unite and take action on the “very serious” situation in Syria, after meetings with China’s President Hu Jintao and Foreign Minister Yang Jiechi.

“I have explained how serious the situation is now and all the leaders in China have also shared my view that this situation is very serious,” Ban told reporters in Beijing after the meetings.

The Security Council will on Wednesday vote on a Western resolution renewing the UN mission in the country that calls for sanctions if the regime does not pull back heavy weapons.

But Syria’s main ally Russia, one of five permanent Security Council members, has vowed to veto the Western-backed proposal. China has twice joined with Moscow over the course of the 16-month conflict in blocking resolutions critical of Damascus.

Ban has already urged China to use its influence to back a peace plan by UN-Arab League envoy Kofi Annan, who is calling on the Security Council to order “consequences” for any failure to carry out his six-point plan.
But China has repeatedly warned against outside intervention in Syria.

“The life of Syria’s current political leadership can only be determined by the Syrian people,” said the People’s Daily, mouthpiece of the Communist Party, in an editorial on Tuesday.

“This is an internal matter and the international community should respect that.”Representatives of the Syrian National Council (SNC) — an umbrella opposition group — met ambassadors from the 15-nation Security Council, including Russian envoy Vitaly Churkin, to press them to back sanctions.

But Russia has branded as “blackmail” the bid to link renewal of the UN mission to the threat of sanctions, and has pledged to veto the resolution calling for sanctions.

The current 90-day UN mission in Syria ends on Friday and if no resolution is passed by then, it would have to shut down this weekend, diplomats say.

The Observatory, meanwhile, said at least 93 people were killed nationwide on Tuesday, among them 48 civilians, adding to its toll of more than 17,000 dead since the revolt erupted in March last year. (AFP).