The United Nations will let its military observer mission’s mandate in Syria expire and back a new civilian office there to support peace efforts. 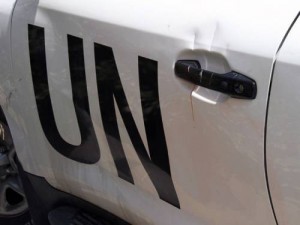 The Security Council will let the United Nations military observer mission’s mandate in Syria expire and back a new civilian office there to support UN and Arab League efforts to end the country’s 18-month conflict.

Araud said the council agreed that conditions set for possibly extending the mission of the unarmed observers past Sunday were not met.

He said there was no halt to the Syrian government’s use of heavy weapons and no significant reduction in violence.

Russia invited UN ambassadors from key world powers that met in Geneva in June and agreed on guidelines for a political transition in Syria to meet in New York on Friday and call on all sides to end the violence.

“More than 18,000 people have been killed during the last 18 months,” Ban told reporters in East Timor on Wednesday. “The Syrian people have suffered too much too long.”

In a letter to the council last Friday, Ban said “it is imperative for the United Nations to have a presence in Syria” aside from its humanitarian operation in order to support UN and Arab League efforts “in mediating and facilitating a peaceful resolution to the crisis”.

The Security Council initially authorised the 300-strong observer mission to deploy to Syria for 90 days to monitor implementation of a six-point peace plan brokered by UN-Arab League envoy Kofi Annan.

The plan was to start with a ceasefire and withdrawal of the government’s heavy weapons and culminate with Syrian-led political talks.

Assad’s government and opposition forces agreed to the plan, but it was never implemented.

Frustrated at the escalating conflict and the failure of world powers on the Security Council to unite to stop the chaos, Annan announced last month he was resigning effective August 31.

Russia and China have vetoed three Western-backed Security Council resolutions that would have stepped up pressure especially against the Syrian government by threatening sanctions if the fighting didn’t stop. (WNA)