<![CDATA[ <div> Speaking in his first full television interview since resuming the presidency, Mr Putin said: â€œToday some people want to use militants from al-Qaeda or some other organisations with equally radical views to accomplish their goals in Syria. This policy is dangerous and very short-sighted.â€ 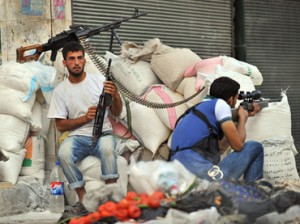 The Russian leader was responding to a host at the Kremlin-controlled RT channel who suggested that western and Arab nations were â€œsponsoring terrorismâ€ by supporting the rebel coalition, the Free Syrian Army, which was â€œsuspected of hiring known al-Qaeda fightersâ€.
Mr Putin expressed agreement with the assessment and said: â€œIn that case, one should unlock Guantanamo, arm all of its inmates and bring them to Syria to do the fighting – it’s practically the same kind of people.â€
He warned against foreign intervention in Syria, saying that â€œno one is confidentâ€ that US troops will have stabilised Afghanistan by the time they withdraw.
â€œThe most important task today is ending the violence,” he added. â€œWe must urge all the warring parties, including the government and the so-called rebels, the armed opposition, to sit down at the negotiating table and decide on a future that would guarantee security for all of the stakeholders within Syria.â€
Russia, backed by China, has so far blocked three United Nations Security Council resolutions aimed at ending the violence in Syria. At home, Mr Putin has signed laws in his new term that critics say are part of a campaign to suppress dissent after the biggest protests of his 12 years in power. Putin said he acted to instil order and that he had taken steps to improve democracy. “What is ‘tightening the screws’?” he said. “If this means the demand that everyone, including representatives of the opposition, obey the law, then yes, this demand will be consistently implemented.” He declined to comment on the sentences handed down to three women from punk band Pussy Riot jailed for two years for performing a raucous anti-Putin song inside a Moscow cathedral. “I know what is going on with Pussy Riot, but I am staying out of it completely”, he told the channel. But he suggested the band’s notoriety had forced its “indecent” name into public discourse, reinforcing the point by prodding his interviewer to translate the word “pussy”. “I want to direct your attention to the moral side of the issue,” he added, describing a previous group-sex stunt that included at least one of the convicted women and adding a off-colour joke of his own about group sex. (Telegraph).
]]>