<![CDATA[A diplomatic solution to the conflict in Syria seemed as far away as ever on Saturday, as the UN-Arab League envoy to Damascus, Lakhdar Brahimi, said the country risked slithering into "hell". <a href="http://www.eelamenews.com/?attachment_id=107767" rel="attachment wp-att-107767"> 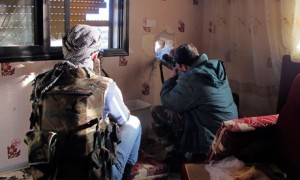 Following talks in Moscow with Russia’s foreign minister, Sergei Lavrov, Brahimi said there was no alternative to negotiations. The country faced two stark choices, he said – a serious, Syrian-led political dialogue between the rebels and the regime, or what he darkly called “Somali-isation”. Brahimi – who held talks on Monday in Damascus with Syria’s defiant president, Bashar al-Assad – said stopping the bloody civil war in 2013 was indispensable. But, he conceded, the obstacles to peace were enormous. After almost two years of fighting, both sides “disagreed violently even about the analysis of the situation”, he said. The Assad regime insisted it was battling “terrorists”, while the armed opposition said it was leading a popular uprising against an “illegitimate” government, already in power for 40 years. Brahimi’s trip to Moscow came amid an upswing in diplomatic activity by the Kremlin, Assad’s most significant foreign backer and arms supplier. Russia last week signalled for the first time it was willing to hold talks with Syria’s opposition. On Friday, however, the leader of the opposition coalition, Sheikh Ahmad Moaz al-Khatib, bluntly dismissed an invitation to Moscow. He told al-Jazeera that Russia should apologise for supporting Assad, then unequivocally condemn his barbarity and press him to resign. On Saturday Lavrov scathingly described Khatib’s stance as “wrong” and a “dead-end position”. He claimed it was “counter-productive” to insist Assad should step down as a precondition for any talks. “He [Assad] will stay until the end. He will defend Syria’s people and Syria’s sovereignty. There is no possibility that this position will change,” Lavrov said, adding that Russia was willing to hold talks with Syria’s opposition in a “neutral” Arab capital. Russia has said it supports a proposal made in Geneva last June that would see Assad stay in power temporarily, while a transitional government was formed with the assistance of international peacekeepers. But the plan does not specify what would happen to Assad afterwards, nor how his security could be guaranteed. Syria’s rebels have rejected it. They say it does not meet the key demand of their revolution – that Assad should quit. Russia’s efforts to push for a deal follow rebel gains on the ground. This month Russia’s’s deputy foreign minister, Mikhail Bogdanov, admitted that the Syrian government was losing territory and that a victory for the opposition could not be ruled out. The Free Syrian Army, the main armed opposition movement, now controls much of the countryside, having overrun a series of army bases, acquiring more arms and ammunition. On Saturday government troops reportedly seized back an area of Homs, following fierce shelling of the Deir Baalbeh district. Clashes were also going on near the Crac des Chevaliers, a 12th-century Unesco-listed castle that  was one of Syria’s biggest tourist attractions. In the north, there was fighting around the Menagh military airport, between Aleppo and the Turkish border. Rebels have been besieging the base for four weeks and reportedly penetrated it on Thursday. (The Guardian).]]>