The Syrian army turned its forces on Aleppo on Wednesday, ordering an armored column to advance on the country’s second biggest city and pounding rebels there with artillery and attack helicopters, opposition activists said. 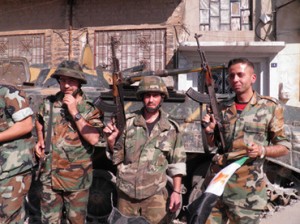 As hostilities intensified near the Turkish border, Ankara said it was closing its crossing posts, although the United Nations said refugees fleeing Syria would be allowed through.

At the Syrian town of Azaz, a few miles south of the Turkish border, rebels appeared in control after heavy clashes over the past month in which they succeeded in driving out government forces, leaving the place a rubble-strewn ghost-town.

Syria’s ambassadors to the United Arab Emirates and Cyprus – a married couple – have deserted their posts, becoming the latest officials to abandon the Damascus government, rebels said.

The 16-month revolt against President Bashar al-Assad has been transformed from an insurgency in remote provinces into a battle for control of the two main cities, Aleppo and the capital, Damascus, where fighting exploded last week.

Assad’s forces have launched massive counter assaults in both cities. They appear to have beaten rebels back from neighborhoods in the capital and are turning towards Aleppo, a commercial hub in the north.

North of Aleppo, the town of Azaz has been almost completely destroyed by heavy fighting. Burnt-out armored personnel carriers sat on the roads where rebels hit them with rocket-propelled grenades. Bullet casings were scattered everywhere.

Most residents fled during the latest fighting, which drove Assad’s forces out over the past month and ended in the rebels taking the Bab al-Salam border crossing with Turkey on Sunday.

Fighting in and around Aleppo is expected to prompt an exodus across the Turkish border, where some Syrian refugees are already complaining about poor conditions and have clashed with riot police in disputes over food.

“There is not enough food. They have broken our hearts, the Turks. Why are they doing this to us?” said a sobbing woman called Umm Omar, with her four children huddled next to her in a camp near the border.

Further south, Syrian forces used artillery and fired rockets on Wednesday on the northern Damascus suburb of al-Tel in an attempt to seize it from rebels, forcing hundreds of families to flee, residents and opposition activists said.

“Military helicopters are flying now over the town. People were awakened by the sound of explosions and are running away,” Rafe Alam, one of the activists, said by phone from a hill overlooking Tel. “Electricity and telephones have been cut off.”

Opposition sources also reported helicopters and machineguns were firing on the neighborhood of Hajar al-Aswad. The slum lies on the southern outskirts of the capital and has been a haven for rebels sneaking into Damascus from the suburbs.

In the north, opposition activists said thousands of troops had withdrawn with their tanks and armored vehicles from Idlib province near the Turkish border and were heading towards Aleppo. Rebels attacked the rear of the troops withdrawing from the north, activist Abdelrahman Bakran said from the area.

State-run Syrian television painted a more favorable picture, saying government troops were imposing security and stability in and around Aleppo.

“The terrorists are suffering terrible losses. Groups of them are throwing their weapons away and giving themselves up. Others are fleeing for the Turkish border,” the television said.

Military experts believe an overstretched Syrian army is pulling back to concentrate on fighting insurgents in Aleppo and Damascus, important power centers for the government, while leaving outlying areas in the hands of rebels.

In Aleppo, helicopters were seen firing missiles throughout Tuesday, residents said. Rebels were battling government forces by the gates of the historic old city. Troops fired mortars and shells at rebels armed with rifles and machine guns.

“I heard at least 20 rockets fired, I think from helicopters, and also a lot of machine gun fire,” a resident, who gave his name as Omar, said by telephone.

Residents said fixed-wing jets had also flown over the city, followed by loud noises, though there were contradictory reports as to whether they had opened fire. Video footage posted by activists appeared to show a warplane firing its guns.

Assad’s forces have occasionally launched air strikes from fixed-wing jets on other cities during the uprising, but tend to rely on helicopters for air strikes in urban areas.

The uprising has entered a more violent phase in the past 10 days since rebels poured into Damascus in large numbers.

Last Wednesday, an explosion killed four members of Assad’s inner circle inside a security headquarters, a blow that wiped out much of the top echelon of his military command structure and shattered the reputation for invulnerability that his family has held since his father seized power in a coup in 1970.

Western powers have been calling for Assad to be removed from power for many months, and now say they believe his days are numbered. But they fear that he will fight to the end, raising the risk of sectarian warfare spreading across one of the world’s most volatile regions.

Syria heightened the alarm on Monday by confirming that it had chemical and biological weapons and saying it could use them against external threats, prompting warnings from Washington and Moscow against using the arsenal.

In its strongest language yet, Russia told Syria that it was unacceptable to threaten to use chemical weapons, the Russian Foreign Ministry said on Wednesday.

In a meeting with Syria’s ambassador to Moscow, Deputy Foreign Minister Mikhail Bogdanov “laid out in an extremely clear form Russia’s position on the inadmissibility of any threats of the use of chemical weapons”, the ministry said.

Israel said that if Syrian-backed Hezbollah guerrillas used the situation to take control of the weapons, it would “act immediately and with utmost force”.

As the revolt against Assad intensifies, top Syrian officials have started to abandon their posts. Syria’s ambassador to the United Arab Emirates, Abdelatif al-Dabbagh, and his wife, who is Damascus’s envoy to Cyprus, Lamia al-Hariri, have defected and are both now in Qatar, the opposition Syrian National Council said on Wednesday.

Brigadier General Manaf Tlas, a member of Assad’s inner circle who fled Syria this month, appeared on television in his first public comments since defecting. He called on troops to abandon the government.

Elsewhere in the country, activists reported a series of killings by government troops and pro-Assad militia.

They reported an attack on a mosque in a village northwest of the city of Hama, with at least 15 confirmed dead. At least nine people were killed in army shelling of al-Herak, a town south of Deraa. In Damascus, activists said they found the bodies of 11 men executed by government forces in the district of Qaboun.

The British-based Syrian Observatory for Human Rights, which compiles reports from activists, said 1,261 people had been killed since the fighting intensified in Damascus on July 15. That made last week by far the bloodiest in an uprising in which activists say at least 18,000 people have been killed. (Reuters).