A group of Syrian rebels from the Free Syrian Army (FSA) defected and joined pro-government forces on Wednesday. The troopsâ€™ commander announced that â€œthe road is open,â€ and called on to other rebels to abandon their uprising. 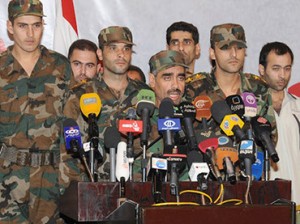 “We have decided to return to the army and cooperate with the Ministry of National Reconciliation,” Lieutenant-Colonel Khaled Abdel Rahman al-Zamel said during a conference of non-combatant Syrian opposition groups.

â€œWe are all Syrians, we reject a revolution that starts with the shedding of blood,â€ al-Zamel said, eliciting applause from the audience.

“The solution can’t be achieved through holding weapons, blasts, sabotage or killing the innocent, but repenting from the wrongdoing and through political means,â€ Xinhua quoted al-Zamel as saying. He previously served as a captain in the Syrian Army, before joining the FSA months ago. He was reportedly the head of the FSAâ€™s leadership in southern Syria, and acted as the deputy chief of the rebels’ military council.

The appearance of al-Zamel and his men came as a surprise to the Damascus conference, organized by some 30 Syrian opposition groups with the aim of opening peaceful dialogue with the Syrian government to resolve the ongoing crisis in the country. The gathering was attended by ambassadors from Russia and Iran, and Chinaâ€™s temporary charge d’affaires for Syria â€“ three nations who consistently supported the Assad regime over the past 18-month uprising.

Al-Zamelâ€™s statement sparked debate among anti-regime activists â€“ some argued that al-Zamel was forced to make his statement; others claimed that they had no idea who he was.

Yaser al-Abed, another FSA officer who attended the conference, formerly commanded a rebel group in Aleppo province. During the conference, al-Abed called on other insurgents to disarm and surrender: â€œWork your minds and know that holding weapons is nothing but a violation to the minds and freedom alike.â€

â€œSyria is our home and honor, but they wanted to burn it. The most targeted things are our religion, nation and land,â€ al-Abed said. â€œI have known all that, and that is why I have decided to lay down my weapon to be a loving person who seeks the good and the humanity.â€

The conference of opposition groups in the Syrian capital of Damascus called on both the Syrian authorities and the rebels to â€œimmediatelyâ€ end violence in the country though an international peace plan.

That same day, rebel snipers killed a journalist with Iranâ€™s Press TV, Syrian national Maya Nasser, as he reported on live TV about the bombings at the army headquarters.

Russia and the US continued to clash in the UN Security Council over the ongoing Syrian crisis: Russian Foreign Minister Sergei Lavrov condemned Western nations for their stance on Syria. “The states that encourage the opponents of Syrian President Bashar al-Assad to give up on the ceasefire and dialogue and to demand that the regime capitulate, bear responsibility for the continuing bloodshed,” he said. “Such an approach is unrealistic and encourages terrorism, which is used by the opposition.â€

US Secretary of State Hillary Clinton accused Syrian President Bashar al-Assad of â€œmurdering of his own people,â€ and argued that the UN is paralyzed by Russia and Chinaâ€™s vetoing of Western-backed resolutions on Syria. (RT News).