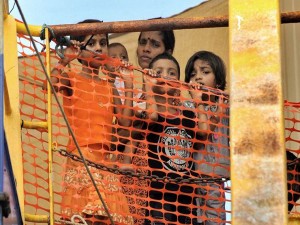 Manokala Jenaddarsan, 41, fled war-torn Sri Lanka in 2009 with her now six-year-old son Ragavan after her husband was killed in a bomb blast.

Manokala was found to be eligible for a protection visa but was moved into detention housing at Villawood after ASIO deemed her a potential security threat, the Sydney Daily Telegraph reports.

But her lawyers on Thursday confirmed she had received a letter from Immigration Minister Brendan Oâ€™Connor indicating ASIO had reversed their decision.

â€œWe are very pleased that Manokala and Ragavan can now live in the community because their ongoing detention has caused great psychological harm and distress to them both. We havenâ€™t been given a time and date for her release but it could be very soon,â€ her lawyer Giri Sivaraman said.

â€œManokala is one of 55 refugees who were deemed by ASIO to be a security risk and who have never been told why they have been given this adverse security assessment.â€

In a statement, ASIO said the status of refugees deemed a risk to the community was constantly monitored.

â€œASIO has always maintained the position that it can, and would, issue a new security assessment in the event new information of relevance came to light,â€ the statement said.