<![CDATA[A group of 51 Tamil asylum seekers were arrested today from Thekkadi near Theni bordering Kerala for attempting to travel to Australia. <a href="http://www.eelamenews.com/?attachment_id=108125" rel="attachment wp-att-108125"> 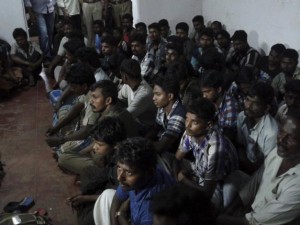 Two persons, who acted as agents to ferry them clandestinely to Australia from Kochi, were also arrested. According to “Q” branch police, which deals with extremist activities, the Sri Lankans from refugee camps from Erode, Madurai, Villipuram, Tiruchirappalli, Dindigul and Mandapam near here, had paid Rs three lakh each to the agents. Following a tip off, police rushed to Thekkady, where the refugees had assembled to go to Kochi in a bus, and arrested them. (PTI)]]>