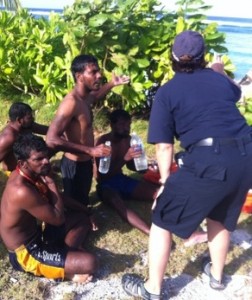 The first planeload of asylum seekers left Christmas Island for Nauru last night, ushering in the revival of the â€˜â€˜Pacific solutionâ€™â€™ 11 years after the Howard government sent to the Pacific those rescued by the MV Tampa. About 40 men, believed to be from Sri Lanka, were escorted on to the passenger jet by officers from the Australian Federal Police. Sources on the island said the plane was boarded without protest. The government also announced an extra 1000 Syrian refugees would be allowed into Australia under the expansion of the annual humanitarian intake. Hours before the first plane was due to leave for Nauru, the Immigration Minister, Chris Bowen, said 1000 refugees who had fled the civil conflict in Syria would be brought to Australia. â€˜â€˜For those for whom the Arab spring has turned to winter, [you] have a friend and a supporter in Australia,â€™â€™ Mr Bowen told Parliament. The government cloaked in secrecy the details of last nightâ€™s scheduled charter flight, fearing a last-minute injunction.]]>