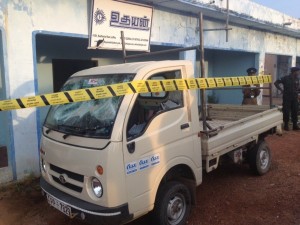 At least three people were injured during the attack while the building and a vehicle parked outside was also damaged.

Staff at the newspaper said that when the newspapers to be distributed were about to be unloaded at the Kilinochchi office from a mini lorry, an unidentified gang approached the vehicle and attacked it with poles.

They then assaulted the staff and went inside the Uthayan office and attacked office property.

Two employees of the newspaper were admitted to hospital while the other person had sustained minor injuries.

A complaint had been lodged over the incident with the Kilinochchi police.

The Tamil newspaper had been the target of several attacks in recent times while distributors and journalists of the newspaper have also faced threats and intimidation.

In January this year a man delivering Uthayan newspapers in Jaffna was attacked and his motorbike as well as a stack of newspapers were set on fire.

The delivery man had gone to the Uthayan office and collected the newspapers and was heading towards his delivery point when he was surrounded by men on two motorbikes.

He was then assaulted using poles and the motorbike as well as the newspapers were set on fire. He was later thrown towards a drain.

The delivery man suffered injuries to his head and arms.