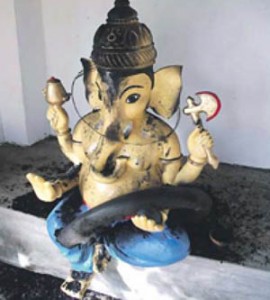 Tamil Hindu devotees who were to conduct a ceremony at a Hindu shrine in the Dambulla area have been threatened by Sinhala Buddhist monks and told not to carryout the annual event. More than 50 Hindu families in the area as well as some Hindu priests had gathered today to carryout the â€˜chariotâ€™ Hindu ceremony at the Kali Amma Hindu shrine. However the Sri Lankan police had later informed the Hindu devotees not to go ahead with the ceremony as Buddhist monks in the area had voiced strong opposition to it. â€œWe were told that if we go ahead with the ceremony the police will not be able to guarantee our safety. Preparations for the ceremony were in place and now when we are told to cancel it we feel really disheartened. However since we are a small community in this area we have stopped the ceremony for now,â€ the devotee said on the condition of anonymity. The Chief Priest of the Rangiri Dambulu Chapter the venerable Inamaluwe Sumangala Thero had in April this year led protests against a Mosque in the area. During the protests a mob had also threatened Hindu devotees in the area and demanded that the Hindu shrine be removed. Recently a Ganesh (pillaiyar) temple was burnt by Sinhala Buddhist monks in Anurathapuram (Pic: Burned Ganesh statue).  ]]>