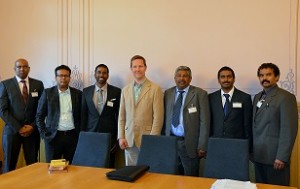 The International Council of Eelam Tamils (ICET), with the participation of the British Tamils Forum (BTF) met with parliamentarians from both the opposition and ruling parties in Norway to discuss the ongoing crisis of military occupation and Sinhala-settler colonialism. In light of Norwayâ€™s role as a peace facilitator, Tamil representatives discussed the problematic role of Mr. Solheim in tilting the parity of status against the LTTE during the peace process. They spoke to parliamentarians about how Norway can make a more constructive contribution to a sustainable peace in the island by taking direct action against the ongoing structural genocide of the Tamil Nation.

â€œFour years after the war, the Tamil Nation is facing severe crisis through total military occupation and Sinhala settlements in the North and East,â€ The destruction of the LTTE and the de facto state-an expression of earned sovereignty-has accelerated a decades old policy of militarization and state sponsored settlements in the Tamil homeland,â€ said Krisna Saravanamuttu, spokesperson of the ICET. Parliamentarians from both the ruling and opposition parties agreed that Norway can, and must, do more to rectify its own mistakes in the peace process through restrictive sanctions on all individuals and companies involved with the occupation.

The Tamil representatives and the Norwegian parliamentarians spoke in detail about the ongoing crisis. They specifically discussed the demilitarization in the North and East as prerequisite for genuine reconciliation. The Tamil delegation further requested Norway to play a leading role in bringing out a resolution in the UNHRC towards International independent investigation. Tamil representatives also insisted that a meaningful peace in the island must be based on the right to self-determination through a UN monitored referendum, not imposed solutions from the international community like the Northern Provincial Council.

The end of war does not guarantee peace. The conflict in the island is far from over and violence continues to happen against the Tamil Nation in their homeland. Norway can rectify the mistakes of the peace process by being a strong voice against Sri Lankaâ€™s crimes against the unarmed and defenseless Tamil people. Our representatives will continue to meet with Norwegian civil servants and parliamentarians to continue our efforts both before and after the countryâ€™s elections.

The ICET is a non-partisan body and met with a cross section of parties including the Christian Democratic Party, Progress Party, Conservative Party, Workers Party, and Socialist Left Party.