Two health activists staged a 12-hour hunger strike in Jaffna on Thursday to protest alleged corruption and fraud in the Jaffna Teaching Hospital and the recent attack on a medical specialist.

They called on the government to expedite inquiries into these allegations and the attack. 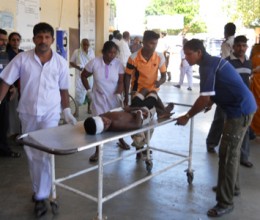 The activists V. Kanthevel who leads the Jaffna regional group of the Peopleâ€™s Movement for the Rights of Patients (PMRP) and M. Chandrapalan, inquirer into sudden deaths, staged the strike outside the hospital directorâ€™s room. The activists were supported by the Government Medical Officersâ€™ Association (GMOA) which had also planned to stage a token strike on Friday in support of the same demands. But a court issued a stay order preventing the token strike.

Mr. Kanthevel said they were given an assurance that the Health Ministry would take urgent and effective action on these issues.