British Tamils raised flags of the Tamil Eelam and distributed leaflets at Stratford, near the Olympic Village in London yesterday (Aug. 06).

They urged the British government to inquire into alleged war crimes and asked that Tamil asylum seekers be not sent back. 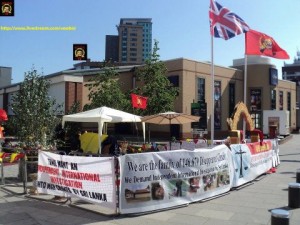 Gobi Sivanthan, 32, has a tent in Burford Road near the Olympic stadium and has refused food for sixtheenth days. He plans to fast until the Olympics are over in protest against Sri Lanka’s participation, claiming the country should be banned for war crimes against Tamils in its long civil war.