The Global Tamil Forum (GTF) views all Tamil parties in Sri Lanka as partners working for the same cause and having the same objectives, and in many ways working together as any family that is doing its best under the circumstances. GTF spokesperson, Suren Surendiran, in an exclusive interview with LAKBIMAnEWS said that the Tamil Diaspora should be approached for talks by Sri Lanka, because it is they who have felt insecure, been victimized, and felt or experienced the danger for their as well as their family’s lives.

What do you intend to do arising from the LLRC report? 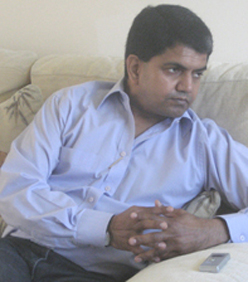 The LLRC report is a document that was commissioned by President Rajapaksa and his government. Therefore it is for them to do whatever they see fit with its recommendations and it is not for the GTF to do anything with it.

GTF, as an organization, has gone on record welcoming the LLRC recommendations and suggesting that if implemented in full, it will take the reconciliation process a long way forward. GTF has also highlighted the substantial inadequacies of the LLRC report in addressing the issue of accountability, the allegations of breaches of international laws, international human rights and humanitarian laws.

GTF has also highlighted the fact that the LLRC never had the means or authority in the first place to investigate the alleged war crimes and crimes against humanity committed by both sides at the end of the war.

The GTF as a representative organization of the Tamil Diaspora, amongst whom there are many thousands of victims – as relatives and friends, has always maintained that sustainable reconciliation in Sri Lanka amongst communities is possible only if justice is served for the tens of thousands of lives that were lost, and the over 146,000 people who have been unaccounted for during the last stages of the war.

As far as GTF and the Tamils as a whole are concerned, fair and equitable justice can only be served by commissioning an independent international investigation into the alleged war crimes and crimes against humanity committed by both sides. Therefore, we will continue to pursue calling for such an investigation to be held as soon as possible.

Did you know about Prof. G.L. Peiris’ visit and the presenting of a document to the US Secretary to the State Hillary Clinton? One of the LLRC recommendation is, ‘The government should engage with the so called hostile Diaspora groups constructively and address their concerns.’ What points do you raise about the recommendation itself?

Yes, we did hear about Prof. G.L. Peiris’ visit to Washington in May and as a matter of fact, in early June as well. GTF was also invited by the State Department to be de-briefed on the discussions held between GLP and Secretary Clinton. I represented GTF along with our local US member organization, United States Tamil Political Action Council (USTPAC) president at this debriefing session at the State Department.

Do you welcome such an approach to involve the

Diaspora to address your concerns too?

Of course! A large portion of the Tamil Diapora left the island because they felt insecure, victimized, had family members murdered, kidnapped, and felt or experienced the danger for their and their family’s lives. It is not out of choice that they left. It is therefore only right that the Diaspora also is given a say.

What do you want for the Tamil community of Sri Lanka?

In no particular order and without exception:

1. People should be made to feel free to speak and feel safe to raise their children without fear.

2. Our democratic rights to be restored without any restrictions including constitutional restrictions.

3. End to army occupation of the north and east.

5. Reveal names of persons held without proper legal process and for them to have access to legal counsel, their families and humanitarian agencies.

6. Charge them under the laws of the land or release them forthwith.

8. Stop the government/military sponsored “land grabbing” that’s going on in the North and the East of the island.

9. Disarm paramilitary groups and bring law and order to be effective in the whole of the island.

10. People to have their lands and homes back and be resettled where they originally lived.

11. Structured and well funded rehabilitation and resettlement programmes to be implemented without too much government interference or corruption.

12. Reconstruction programmes to be implemented in the war affected areas.

13. We want the disparity in development between the regions of the island to be minimized, basic priorities of all people (e.g. education, health, employment, etc.) to be treated as priorities and dealt without corruption.

14. We want justice for all the wrongs that were done to our people in the name of war against terrorism.

15. Probe allegations of war crimes and crimes against humanity against both parties to the armed conflict by an independent international body.

17. Credible and genuine political process to be initiated with international sponsorship, unlike the ones that the Rajapaksa regime introduces when pressure mounts (e.g. the APRC, negotiations with the TNA and now the Parliamentary Select Committee, etc.) to seek a durable political settlement to resolve the long standing and genuine grievances of the Tamil people and all people.

19. Above all, we do not want the Sinhala people to feel that they are outcasts for the colossal mistakes and wrongdoings of a few in the government and the military.

How do you see the Tamil parties of Sri Lanka and the way they work towards the Tamils? How could they support your ideals?

GTF sees the Tamil parties as partners working for the same cause. We all have the same objectives and in many ways we do work together as any family would. We believe that they are doing a fantastic job under the circumstances.

If you want the LLRC to be implemented which one you would go first with? What is the major area of concern you would want to look into?

Again, my above answers; all of those 19 points are important. The LLRC has addressed some or most of those at various degrees. Equally, the LLRC has not or hasn’t adequately addressed some others in that same list as highlighted in my answer to question number one.

Even the points that the LLRC has addressed, until they are acted upon and implemented in full, will remain as recommendations in a document rather than being reality.

Your preamble to the many sub questions within the above main question makes assumptions, presumptuous and misplaced statements. For example, you state, Tamils aspirations are always shown via protests whenever President MR is on foreign tours. I would like to ask what or which Tamil’s aspirations are reflected by protesting against an alleged war criminal like President Rajapaksa?

Now to your questions, technically, the flag that Tamils and non-Tamils carry at protests and demonstrations around the world is not the LTTE flag. I agree that it looks very similar. Did you know the actual LTTE flag’s background colour is not red?

At appropriate times and for appropriate events every year, Tamils do carry black flags, for example for ‘Black July’ events around the world and for Mullivaaikaal Remembrance events. Generally flags signify identity or nature of events. The peoples’ struggle against oppression and injustices cannot be ‘completely done away with’ as you put it until an acceptable solution is found for their grievances. History has shown in many liberation struggles throughout the world that they go through different phases. In that process, victories and defeats will form part of history but not necessarily a means to an end.

Successive Sinhala leaders and governments since independence like President Rajapaksa and his government have misled (us), missed opportunities and not demonstrated sincerity in resolving this national question for the past 64 years. None of these leaders ever had the courage or wisdom to explain properly to the people of the island of all communities that finding a practical, feasible and acceptable solution to the genuine Tamil grievances will benefit all communities and perhaps give a decent chance for all people to prosper and live peacefully as friendly neighbours. Instead, every leader and government since independence without exception has abused the situation and circumstances to their own advantage.

I would like to acknowledge that at different times in the past, Tamils and Tamil leaders too could have dealt with matters differently.

It is now up to the people of all communities of the island living inside or outside to come together to act responsibly, rather than believing or expecting people like Rajapaksa or others to resolve these fundamental issues, before it’s too late.