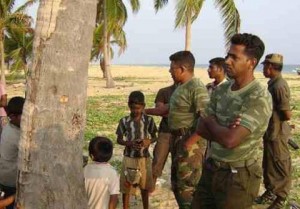 Dr.I.Sivashankar employed as a Medical Officer at Anuradhapura a native of Jaffna had been arrested yesterday and is detained at the Kokavil military camp is according to unconfirmed information, Tamil daily reported.

A woman a native of Kilinochchi Uruthirapuram recruited to the military had come home to sit for the G.CE. Ordinary level  examination. Military had urged, she should be handed over to the camp on conclusion of her examination.
However the said woman had informed her parents that she is going to resign from the military and with the assistance of Dr.Sivashankar she had gone yesterday afternoon to Kokavil military camp.
However military had informed that she can only resign legally and one month notice is required hence a friction emerged between the military and the parents.
Following this, military allowed the woman and parents to go home, but they had detained the Medical Officer. This incident had been confirmed by the family.
Meanwhile the arrested Medical Officer had been handed over to ManKulam Police station which was the information received, and when contracted Mangulam Police station, they informed such incident did not occur.
]]>