<![CDATA[ <div id="id_50e40682c5f127812554746"> At 23, J Vinodhini was her parents’ only pillar of support. When she joined an engineering college in Karaikal district in Puducherry for a B.Tech. (information technology) course, her parents, Jayapal and Saraswati, sold their small plot of ancestral property to finance her education. They too moved to Karaikal, where Jayapal got a job as a watchman at a school. About three months back, Vinodhini joined a private company in Chennai after completing her education, bringing hope and joy to her parents. 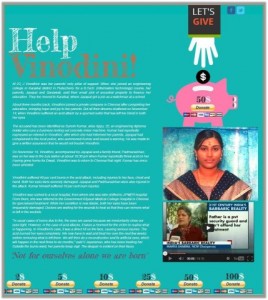 But all their dreams shattered on November 14, when Vinodhini suffered an acid attack by a spurned suitor that has left her blind in both her eyes. The accused has been identified as Suresh Kumar, alias Appu, 32, an engineering diploma holder who runs a business renting out concrete mixer machine. Kumar had reportedly expressed an interest in Vinodhini, after which she had informed her parents. Jayapal had complained to the local police, who summo…ned Kumar and issued a warning. He was made to give a written assurance that he would not trouble Vinodhini. On November 14, Vinodhini, accompanied by Jayapal and a family friend, Padmanabhan, was on her way to the bus station at about 10:30 pm when Kumar reportedly threw acid on her. Having gone home for Diwali, Vinodhini was to return to Chennai that night. Kumar has since been arrested. Vinodhini suffered 40 per cent burns in the acid attack, including injuries to her face, chest and hand. Both her eyes were severely damaged. Jayapal and Padmanabhan were also injured in the attack. Kumar himself suffered 10 per cent burn injuries. Vinodhini was rushed to a local hospital, from where she was later shifted to JIPMER hospital. From there, she was referred to the Government Kilpauk Medical College Hospital in Chennai for specialised treatment. While her condition is now stable, both her eyes have been irreparably damaged. Doctors are waiting for the wounds to heal so that they can remove what is left in the sockets. “In usual cases of burns due to fire, the eyes are saved because we involuntarily close our eyes tight. However, in the case of acid attacks, it takes a moment for the victim to realise what is happening. In Vinodhini’s case, it was a direct hit on the face, causing serious injuries. The acid burned her eyes completely. We now have to wait and treat her over the next few weeks before removing what is left there. We will then do a reconstruction and fix artificial eyes, which will happen in the next three to six months,” said V Jayaraman, who has been treating her. Outside the burns ward, her parents keep vigil. The despair is evident on their faces. http://www.helpvinodhini.com