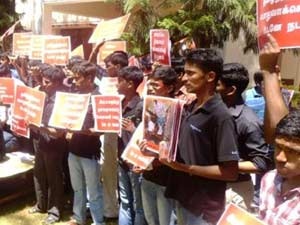 Thousands of Tamil students joined in the Tamil Nadu on last week, protesting against the continued genocide against Tamils in Sri Lanka.
Students in Tamil Nadu the State will observe March 20 as big protest day in support to demand referendum for Tamil Eelam and US-backed draft resolution against Sri Lanka that is set to be tabled in the United Nations Human Rights Council in Geneva.
The Tamil Nadu government has asked 438 arts and science colleges in Tamil Nadu to be closed immediately till further orders as student organisations across the state gear up to organise massive protests from Monday.
The students are demanding that India vote against Sri Lanka on a resolution expected to be moved at a meeting of the United Nation’s Human Rights Council in Geneva this month.The US is expected to move the motion against Sri Lanka on war crimes and rights violations against Tamil civilians during the final phase of the war against the Liberation Tigers of Tamil Eelam. All political parties in Tamil Nadu have been pressuring the Indian government to vote against Lanka.The students have cle­arly outwitted the net­as here in the Lankan Tamils issue this time. During the weeklong protest sustained without political backing, they have not only kept oliticos at bay but also outdid them by raising key demands on the issue. Unlike most political parties in TN that emphasize on trying Lanka for war crimes, students have focused mainly on early political settlement for Eelam Tamils.
In fact, one of their main demands is holding a referendum for forming separate Tamil Eelam. The students of mannarkudi government ars college, are in hungerstrike on Srilankan issue.
Most of the Tamil politial parties express their support to students protests.
The CPI
The CPI leader have met them to support their motion. Speaking to the reporters he said, ” Coming 20th nearly one crore students of all
educational institutions in TN,, will be participating in a hungerstrike”.
PMK
PMK founder Dr. Ramadoss has warned Tn govt of people revolution is the student protest is suppressed
TVK
TVK founder Velmurugan said that his party will support the sutdents federation’s 20th protest for Lankan Tamils.
MDMK
MDMK founder Vaiko has hailed students agitation over Lankan issue as a revolution and said no one can stop this by any means.
Hundreds of students have decided to hold rally in Chennai on sunday urging the centre to support Tamil Ealam.