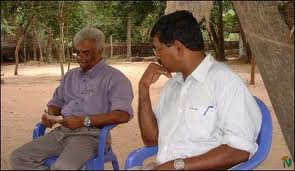 LTTE’s cultural unit head Puthuvai Ratnaturai is in the custody of the Sri Lankan military, says ‘Divaina’ in a report by is defence correspondent Keerthi Warnakulasuriya. It says that Ratnaturai is also described as Tamil poet. An internet petition ‘Where is Puthuvai?’ is underway to seek his freedom. Previously too, on May 13 this year, ‘Divaina’ claimed he was in military custody. Testifying before the LLRC, LTTE political chief Yogiratnam Yogi’s wife has said she had seen nearly 50 people, including her husband and Ratnaturai, had surrendered to the military and were taken in buses.]]>