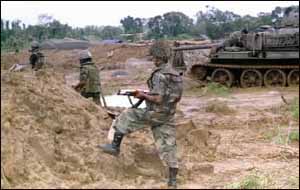 The main door of the house of the Tamil National Alliance’s (TNA) Chief candidate from the Batticaloa district for the forthcoming Eastern Provincial Council poll and Attorney at Law K.Thurairajasingam was locked from outside by unknown persons yesterday.

Thurairajasingam had to call the police and break the lock of the front door of his house to come out of with his family yesterday sources said. The house of Thurairajasingam who was also a former TNA Parliamentarian is located at Lake road, Batticaloa.

The candidate’s house was locked from outside by unknown persons when the occupants locked it from inside as usual. According to sources, the incident was a threat issued against Thurairajasingam who will be submitting the TNA’s nominations at the Batticaloa Government Secretariat today.

TNA sources said several TNA candidates for the Eastern Provincial Council have made complaints that they have been threatened by phone calls and in various other ways.