This month marks the 28th anniversary of what became known as Black July. 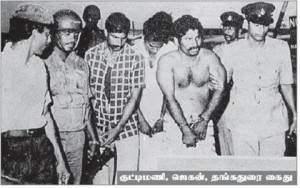 July 23, 1983 saw the outbreak of massive anti-Tamil riots in the capital Colombo. This chaos was to continue for a week. Also known as Black July.

In the prison riots that broke out on July 25, 1983 at the Welikade “high security” prison, four miles north of Colombo, angry Sinhalese inmates wielding spikes, clubs and iron rods broke into the ward housing Tamil prisoners.

It is suspected that prison guards may have provided the Sinhalese inmates with tools to break in to the Tamil ward.

Amnesty International would later note that prison authorities had assisted the rioters at the Welikade prison. Including KuddyMani, Thangathurai and Jegan, thirty-five Tamil prisoners were massacred as a result of the prison riots on July 25.

These political prisoners were deported from Tamil Nadu to Sri Lanka by Karunanithi’s government.

A curfew was finally imposed at the end of the day, the first time since the general riots began. On July 27, however, riots erupted again at the Welikade prison. This time, a further 17 Tamil prisoners were killed by Sinhalese inmates.