<![CDATA[Sri Lanka and its cricket team should be exiled from world sport in the same manner as Zimbabwe and boycotted by Australia, according to Tamil protesters who demonstrated outside the MCG for the start of the Boxing Day Test. As cricket's showpiece game, the Boxing Day Test provided the opportunity for President Mahinda Rajapaksa to continue to launder his "dirty image", offering more spin for the government than anything the MCG wicket could offer, protesters said. <a href="http://www.eelamenews.com/?attachment_id=107651" rel="attachment wp-att-107651"> 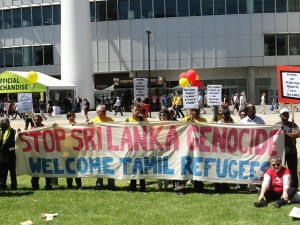 “In 2007 Australia didn’t go on a tour [to Zimbabwe] mainly for security reasons, but [John] Howard called [President Robert] Mugabe a grubby dictator and said that cricket would give him the oxygen that he didn’t deserve,” said protest organiser Trevor Grant. “There is very much a disparity between the treatment of Sri Lanka and of Zimbabwe because this is a small country. There is low awareness in this country about the problem and that is why we are trying very hard to raise the awareness. Advertisement “This is a military dictatorship. The UN report after the war in 2009 said the Rajapaksa regime needed to be investigated for war crimes and crimes against humanity and they needed an independent investigation. Rajapaksa has refused point blank to do that.” The protesters, numbering about 150, called for those arriving for the Test to be aware of the situation in Sri Lanka and to reconsider going inside. The protesters said the Sri Lankan side was more closely associated with the politics of the country they were from than other cricket teams around the world 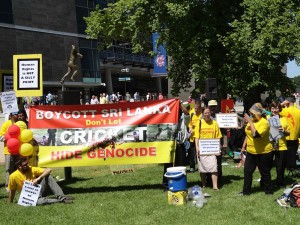 “The Sports Ministry runs the cricket team and even Sangakarra accused them of massive corruption the other day and the President uses it to launder his image,” said Mr Grant. “He has used it to build a stadium in his home town and put his name on it – that was the one for the World Cup. “He rang the team in England last year and demanded that Sanath Jayasuriya be put back into the team for a one-day farewell. Jayasuriya had not played for four years, the team was dumbfounded; he was 41 years old and he still went out. The reason? Jayasuriya is now a government MP in the Rajapaksa regime. ”They are the ones who link politics and sport very, very closely. We regard the team in many ways as a propaganda unit, because they keep saying there is peace and serenity in Sri Lanka now but there is no peace and serenity in the north where there is one soldier for every five people, and that has been documented by the Indian Political and Economic Weekly earlier this year.” 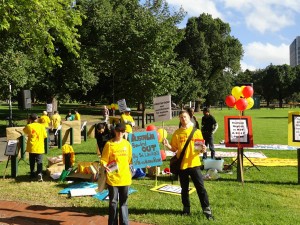 Mr Grant, a former cricket writer for The Age and News Ltd, said: “First of all we want people to be aware of the issues. We don’t want them to not attend because we say we want them to, but we want them to be aware of what is happening and to do it off their own bat. “What we are asking for is Cricket Australia and the Australian government to halt future matches and tours against Sri Lanka until the Rajapaksa regime agrees to an independent investigation of war crimes and crimes against humanity, and stops the persecution of Tamils which is sending refugees to Australia.” (theage.com.au)]]>