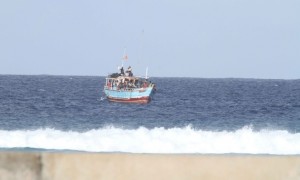 Twenty five Tamils were arrested today when they attempted to board two ferries off Cuddalore coast (Rameswaram) to Australia, the Tamil Nadu police said. The â€˜Qâ€™ branch, which deals with extremist activities, nabbed them as they were about to board the two mechanised ferries, police said, adding all of them were from Mandapam, Bhavanisagar, Namakkal and Erode refugee camps. The drivers of the two ferries were also arrested. Police said that each refugee had paid between Rs one lakh (Indian Rupees) to two lakh to those who had assured them safe passage to Australia.]]>