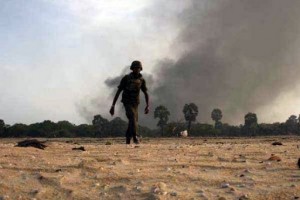 ASYLUM seekers forcibly deported from Australia say the government ignoredÂ  their claims of persecution, granted them only one brief interview in detentionÂ  and knowingly sent them back to danger in Sri Lanka. The United Nations High Commissioner for Refugees says their forcibleÂ  deportation, and subsequent imprisonment, raises “troubling concerns” withÂ  Australia’s asylum processes. Fairfax Media met with members of the latest group of 50 men expelled fromÂ  Australia – 38 Tamils and 12 Sinhalese who were deported last Friday – afterÂ  they were bailed from Negombo court on Sri Lanka’s west coast. It comes as the Australian government agreed in the High Court on WednesdayÂ  to reconsider the refugee claims of 56 Tamil men due to be deported thisÂ  week. The men had previously been ”screened out” of the refugee process butÂ  launched a legal bid to have their claims heard. In Negombo, Megaraj Suresh, a returned Tamil man from Batticaloa, said he hadÂ  been harassed and beaten by Sri LankanÂ  “government people” because heÂ  campaigned for the opposition Tamil National Alliance party. He has previouslyÂ  been jailed for his political activism but said Australia did not listen to hisÂ  claim. “I had only one interview to determine my case, they had already decided toÂ  send us back,” he said. “They didn’t do proper research, they didn’t care about my circumstance, orÂ  even look at my documents, they were not honest in their assessment.” A spokesman for the UNHCR in Canberra said the agency was troubled by the wayÂ  Australia was processing people’s claims. ”In principal, UNHCR has no objection to the return of people found clearlyÂ  not to need international protection,” he said. ”However, the first step must be a fair and accurate process to assess anyÂ  protection claims that are raised. ”The current procedures raise troubling questions as to both fairness andÂ  accuracy, which we have raised with the Australian government.” An immigration department spokesman would not respond to specific questionsÂ  about screening processes, saying: ”The department does not discuss specificsÂ  of its discussions with clients.” But he said: ”The removal of these people was consistent with Australia’sÂ  non-refoulement obligations [not to return people to danger]. Since May 2012 there has been an increasing number of people outlining that theirÂ  reasons for coming to Australia were based on economic concerns. The process andÂ  then removal of people who make economic claims or who otherwise make unfoundedÂ  claims for protection is consistent with Australia’s obligations.” Mr Suresh said he feared for his life and for his family. ”The criminal investigation department has my details now, the number of myÂ  house where I live, my phone number, everything,” he said. ”I have great fear for my life. I don’t know what I will do. ”I needed Australia to help me but they just sent me back to danger. Now IÂ  wait for when the white van will come for me.” Men in unmarked white vans are notorious in Sri Lanka for snatching people,Â  usuallyÂ  opponents of the government, from the street or their homes. Rajesh, who gave only one name, said he fled Sri Lanka because of a disputeÂ  over a house with government-allied paramilitary troops. ”I spoke honestly â€¦ about my safety situation but they didn’t want to accept my answers,” heÂ  said. Australian Tamil Congress spokesman Bala Vigneswaran said one of the menÂ  marked for return had contacted him to say he told Australian authorities heÂ  feared for his life if he returned to Sri Lanka. Officials talked to the man ”for only five minutes”, Mr Vigneswaran saidÂ  the asylum seeker told him. The man tried to tell an official he was a refugeeÂ  but Mr Vigneswaran said she replied: ”No I am not here to hear all thoseÂ  stories, you are going.” He said the man ”kneeled down and begged and criedÂ  and they said, ‘Please leave now’,Â  and he came back [from the screeningÂ  interview] after only three minutes”. Leading refugee lawyer David Manne said: ”If Australia were to summarilyÂ  expel someone without due process who had expressed fears of being persecutedÂ  that would amount to a flagrant violation and a flagrant rejection of ourÂ  obligations under the Refugee Convention. ”The concern here is not that all of these people are refugees – they may orÂ  may not be – the concern is that we don’t know because they have been deniedÂ  basic due process.” The Sri Lankan government deniesÂ  allegations that anyone faces mistreatment.Â  But the Australian government has acknowledged persecution continues to exist inÂ  Sri Lanka, three years since the end of the war. At a UN human rights meeting in Geneva last month, Australia told Sri LankaÂ  to ”reduce and eliminate all cases of abuse, torture or mistreatment by policeÂ  and security forces â€¦ [and] all cases of abductions and disappearances”. Canberratimes.]]>