Diaspora Tamils should focus their full efforts in demanding the United NationÂ  to conduct a plebiscite among the Tamil speaking people in the Tamil homeland, told Professor Giuseppe Burgio from the University of Palermo, Italy, at the Pongku Thamizh rally held Saturday in front of the United Nations Office in Geneva in Switzerland, Tamilnet reports.

More than 3,500 Tamil activists across Europe gathered in Geneva to assert their resolve to uphold the struggle for the independence ofÂ  the nation of Eezham Tamils. A group of mayors and lawyers from France appeared in the stage vowing their support to Eezham Tamils’ Right to SelfÂ  Determination and international legal efforts that sought to pave the way forward. Norwegian Red party politician Stian Nicolajsen told the gathering that his party would extend full support to Tamils’ independence.

A meaningful peace could only be achieved when Tamils gain their long desired freedom, Nicolajsen told the gathering.
The Italian professor in his address said that the Tamils have a long history spanning thousands of years. It is only a matter of time before the Tamil flag is flown in the UN assembly, declared. 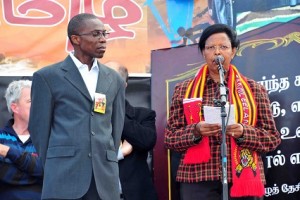 Tamils from France came to the event in large numbers hiring a train, news sources in Geneva told TamilNet.
Apart from the attendance of progressive forces from France, Germany, Norway, Italy and UK, the rally has also brought together youth activists who have been in the forefront in mobilising the masses in the diaspora.
The Tamil activistsÂ  raised issues of land-grabs, militarization and colonization of the Tamil homeland and the release of Eezham Tamil prisoners of war. They also called for a complete rejection of any solution based on the LLRC report, alleging that it was a product of the “genocidal intent” of the Sri Lankan state.
A total of nine grassroot diaspora organizations further urged the member states to take action in the 21st session of the UNHRC based on five immediate measures.

The slogan for this year’s Pongku Thamizh event was “We demand our land”. Â 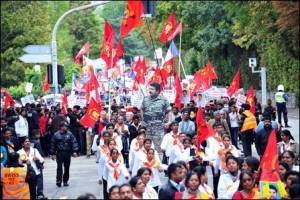 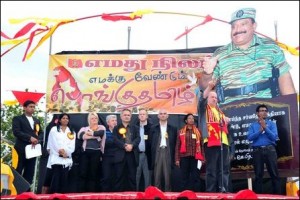