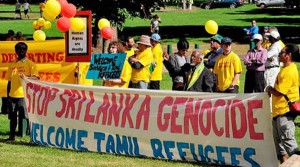 Dozens of Tamil protesters gathered at a showcase cricket match in Melbourne Wednesday to denounce alleged war crimes by Sri Lanka’s government. About 150 protesters assembled at the Melbourne Cricket Ground during the opening day of the second test between Australia and Sri Lanka to denounce Sri Lankan President Mahinda Rajapaksa and urge fans to boycott the event, The Age reported. “This is a military dictatorship,” protest organizer Trevor Grant told the newspaper. “The U.N. report after the war in 2009 said the Rajapaksa regime needed to be investigated for war crimes and crimes against humanity and they needed an independent investigation. “Rajapaksa has refused point blank to do that.” The group asserted Rajapaksa was using the high-profile cricket test to launder his “dirty image.” Grant, a former cricket writer for The Age, told the newspaper the group is asking Cricket Australia and the Australian government to “halt future matches and tours against Sri Lanka until the Rajapaksa regime agrees to an independent investigation of war crimes and crimes against humanity, and stops the persecution of Tamils which is sending refugees to Australia.” (UPI)]]>