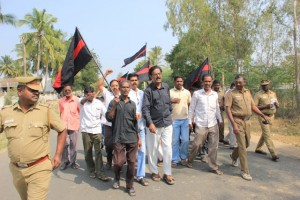 About 50 protesters assembled at the Karunya University during the second day of the conference to denounce Sri Lankan President Mahinda Rajapaksa and urge authorities to evict Sri Lankan Sinhala participants. “Sri Lanka is a military dictatorship,” protest organizer and Periyar Dravidar Party secretary K Ramakiddinan told. “The U.N. report after the war in 2009 said the Rajapaksa regime needed to be investigated for war crimes and crimes against humanity and they needed an independent investigation.  ]]>