While the Solhiems of the West urge the Eezham Tamils to use only Gandhian methods of protest to secure some convenient solution within a unitary Sri Lanka, youth activist Gobi Sivanthan’s hunger strike following Gandhian means, which is entering its 15th day today, shows to the western world that the just demands of the Eezham Tamil nation cannot be compromised for the sake of convenience. Speaking through a video interview for TamilNet, Sivanthan, along with Sasithar Maheswaran from TCC-UK, said in unequivocal terms that only an independent Tamil Eelam can resolve the problems of the genocide affected Eezham Tamils, referring to the three types of sovereignty that the Tamils are entitled to as highlighted in the TSC declaration. 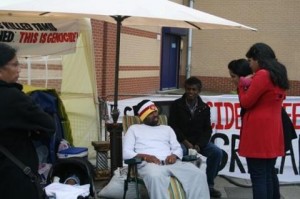 Activists from the National Union of Students, the largest student group in the UK, Restless Beings, an activist group of Rohingya Muslims, activists from Occupy London, Refugees and Migrant Forum Office London and other socialist groups conveyed their solidarity to the hunger striker over the last couple of days.

Sivanthan talked about the rationale of his method of his protest and his five demands, focussing on the accelerated land grabs and colonization of the Tamil homeland which he said Sri Lanka was doing with the genocidal intention of depriving the Tamil nation of its territorial integrity.

He also criticized countries that were trying to paint a picture of normalcy in the island of Sri Lanka by deporting Eezham Tamil asylum seekers.

Referring to the three types of sovereignty that the Tamils possess, he said that the UK and the world powers should recognize that.

Sivanthan appealed to Tamils in Tamil Nadu and the Tamil diaspora not to be fooled by solutions within a unitary Sri Lanka like internal self-determination, provincial councils, regime change etc that were being imposed on the Eezham Tamils by the world powers, insisting that Tamils world over should not compromise on the goal of an independent Tamil Eelam.

Speaking about the protests by Eezham Tamils in the UK against Mahinda’s visit to the British Queen’s Diamond Jubilee ceremony and Sri Lankan presence in the London Olympics, Mr. Maheswaran said that the underlying principle in both the protests were the same, opining that they did not target an individual but challenged the legitimacy of the genocidal unitary Sri Lankan state.

He lamented that the authorities in the Foreign and Commonwealth Office and the people who set foreign policy are not responding to the mass demonstrations of the Eezham Tamils and still continue to give legitimacy to genocide accused leaders and officials of the Sri Lankan state.

Mr. Maheswaran further said that the UK was fully aware of the three forms of sovereignty that that the Tamils were entitled to, as described in the Tamil Sovereignty Cognition declaration, criticising measures by world powers that kept the Eezham Tamils bound to a solution within the unitary state of Sri Lanka. (Tamilnet).