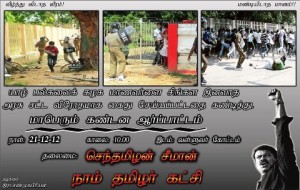 The Naam Thamilar Party (We are Tamils) in Tamil Nadu announced that a demonstration will be held on Friday (21) in Tamil Nadu to protest against Sri Lankan government violence against Tamil students. The Party Leader Mr Seeman said that the demonstration will be to protest against the attack on the students who attempted to commemorate the Tamil ‘heroes day’ anniversary.  ]]>