ON A remote stretch of Sri Lanka’s west coast lies the village that wants to come to Australia.

The homes here are built alike, low and squat, their thatched roofs tightly tied down against the monsoon’s rains and wind. And from almost every one, someone has left for Australia. 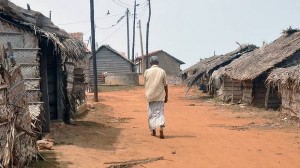 Some reach Christmas Island, phoning home to say they’re safe. Others are caught before they can board a boat, or have their vessel stopped and turned around by Sri Lankan navy ships. Still others leave and are never heard from again.

Sangita and her sister Aahna cry for asylum seekers who have left her village. Her brother was jailed after he tried to leave. Photo: Abeetha Sandish Pathirana

”Five hundred people have left from this village, from this area, all for Australia,” says Kajan*, waving his arm along the beachfront, a few hundred metres down from a military watchpost over the sea. ”Everybody is going because they see other people reach there and they want that life too.”

His son-in-law and a friend, both fishermen, left a little over a month ago. They reached Christmas Island after three weeks at sea. ”They went for money reasons,” he says, through an interpreter. ”We cannot make a living here. They went so they could support our family.”

Kajan insists that, three years on from the end of Sri Lanka’s brutal separatist civil war, the country still offers Tamils no chance ”to make a good life”. ”No job, no education, we have trouble from the police and army. We are desperate people,” he says.

This year has seen a massive jump in the number of asylum seekers, overwhelmingly Tamil, fleeing Sri Lanka for Australia. So far, 1541 Sri Lankan asylum seekers have reached Australian territory, more than a 700 per cent increase on the figure for all of last year (211).

The Herald has chosen not to name this isolated Tamil-dominated fishing village, its location or the names of those spoken to. The people speak only on condition of anonymity. They fear government reprisals, against them or against their family members.

Every house has an Australian story. Dharuna’s 27-year-old son left for Australia 18 days ago. He caught a bus in the middle of the night, then rang to say he’d boarded a boat and was leaving the country. She’s not heard from him since.

”Everybody else who left [from here] has reached [Australia and] has called, but he has not called. Every day I am waiting.”

She says her son was following others who’d successfully crossed before him. Still, she resisted letting him go.

”It was difficult, I didn’t want [him to go], but I had no choice. I have four children, we need him to support us.”

Across the unsealed street, Gadin appears thin, tired and drawn. He is two days out of jail. He was caught on board a boat bound for Australia two months ago, which was stopped by a navy ship. He was interrogated for two days by the Sri Lankan police and then jailed for more than a month, he said.

”It was very hard, we slept chest to back, all packed in like sardines. I could not sleep and there was hardly any food,” he says.

His sisters got him out. His freedom cost tens of thousands of rupees, they tearfully explain, but decline to go into detail of whom they paid and for what. If he flees again, his family will suffer.

Economic opportunity, real or perceived, is the major driver that puts people from this village onto leaky boats bound for the other side of the ocean. But some leave here because they face serious, systematic and sometimes terrifying persecution.

The ”white van” abductions – where people are grabbed from the street by plain-clothed men driving unmarked vehicles, to disappear for days, weeks or sometimes forever – are less common this far from the big cities. But people are regularly hauled in by police and face prolonged, sometimes violent, interrogation.

The latest United Nations report on Sri Lanka says it is ”seriously concerned about the continued and consistent allegations of the widespread use of torture and other cruel, inhuman and degrading treatment of suspects”.

People say this village never supported the terrorist Liberation Tigers of Tamil Eelam, better known as the Tamil Tigers. They claim they are targeted simply because they are Tamil.

”It doesn’t matter if you did nothing, if you don’t know anything, you are under suspicion always,” Gadin says.

The men here are fishermen, regularly plying their trade in the north and east of the country. During the war, that brought them into contact with the rebel Tigers, often unwillingly.

In the uneasy peace that exists now in postwar Sri Lanka, a line can be drawn to almost every Tamil.

”Anyone can be accused,” Gadin says, ”we are all guilty to them.” But leaving often makes the situation worse for those left behind. Police arrive unannounced at people’s homes, demanding to know why they left and who took them.

Names have been changed.