Indian batting superstar Sachin Tendulkar will skip the upcoming series of limited-over matches in Sri Lanka, the national selectors announced on Wednesday. India will play five One Day Internationals (ODIs), starting in Hambantota on July 21, plus a one-off Twenty20 match on August 7. 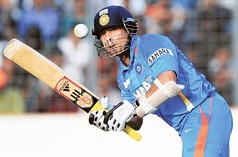 The 39-year-old Tendulkar, who completed an unprecedented century of centuries during the Asia Cup in Dhaka in March, is the worldâ€™s leading run-getter in both Test (15,470) and one-day (18,426) cricket.

Tendulkar, who does not play in international Twenty20 games, has dismissed talk of retirement but has chosen to play in only some of Indiaâ€™s ODIs in recent years.

â€œSachin is not available [for selection]. He must be aiming for the England and Australia series later this season,â€ chief selector Krishnamachari Srikkanth said.