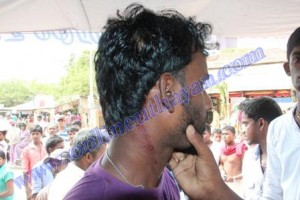 A tense situation arose in Jaffna this afternoon after a SinhalaÂ traffic policeman had assaulted a driver of a vehicle on the basis that he had failed to stop at a police checkpoint.

The Jaffna based Uthayan newspaper website reported that the incident occurred when the vehicle was proceeding from the Nallur Temple after the annual festival today.

A Sri Lankan policeman manning a checkpoint had stopped the vehicle but as there was a huge crowd in the area the driver had driven the vehicle a bit further and stopped.

The policeman, angry over the failure by the driver to stop close to the checkpoint, assaulted the driver and also pulled a chain he was wearing around his neck.

According to the news website the driver sustained head injuries in the assault and was bleeding.

People in the area who had witnessed the incident protested and wanted action taken against the policeman.

The protest lasted for nearly an hour, the newspaper said.