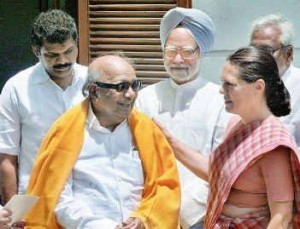 Karunanidhi, the chairman of the conference, has tasked his son Stalin, DMK Treasurer, to head a reception committee to make arrangements. Five secretaries.â€“ K. Ponmudi (a former State Minister), Dravidar Kazhagam General Secretary Kali Poonguntran, General Secretary, Viduthalai Siruthikal Katchi, General Secretary Ravikumar and DMK functionaries K.S. Radhakrishnan and advocate H.M. Jinnah. South Indian media reports quoted one of them as saying, â€œWe want to hold the conference on the lines of the one held in Madurai in 1986.

Besides inviting national leaders, we are planning to bring human rights activists from across the world and international leaders who are supporting the Tamil Eelam cause.â€

But Delhi sources said that it is unlikely the centre in New Delhi would grant visas to any foreign participants since India has said it has strong stakes in the unity and territorial integrity of Sri Lanka.

The question yet remains whether the Indian government would take any other steps to prevent the conference from taking place. This is on the basis that Indian soil should be allowed to be used by Sri Lanka to campaign against Tamils.