<![CDATA[Two universities have evacuated their campuses after receiving terrorist threats. Officials at the University of Texas at Austin say the man who targeted their school with an alleged bomb claimed to be a member of al-Qaeda. <!--RTEditor:genereated-->Â­ 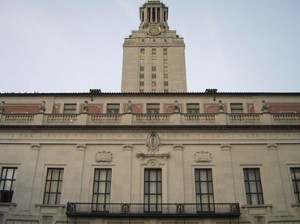 The Director of Communications at the University of Texas-Austin, Rhonda Weldon, received a call from a man with a â€œMiddle Easternâ€ accent who said he was part of al-Qaeda just after 8:30 a.m. local time Friday morning. The caller said that he had placed bombs â€œall over campusâ€ that would go off after 90 minutes. Wheldon sent an email telling the students and faculty at the 50,000-strong campus to â€œget as far away as possible.’‘ Buildings on school property were reported to be vacated within an hour, although Twitter messages sent from the scene suggest that students and faculty are still in the area. Bobby Blanchard, a reporter with the schoolâ€™s Daily Texas newspaper, reports via Twitter that students were still close to campus buildings despite pleas from authorities. Others, he reports, relocated to nearby coffee shops to take cover. An hour-and-a-half after the supposed bomb was scheduled to detonate, Blanchard tweeted that there was no indication that any explosives went off, and that some stragglers were still inside campus buildings. Shortly after the reports were made, UT student Alec Sanchez told the Waco Tribune that buildings were being shut down but that police presence was initially minimal, despite concerns. “Theyâ€™re just standing there. I watched people try to get back on campus but the faculty/administration is guarding campus,â€ Sanchez said. “I have no idea what is going on. Theyâ€™re not telling us much.” Police soon after began combing the scene for any dangerous devices, but were unable to immediately locate any. As a precaution, classes for the day have been cancelled, although the school will allow people to reenter facilities later today. Events at the North Dakota State University in Fargo followed a similar scenario, though the administrators there have not revealed anything about the identity of their caller. â€œNDSU received a bomb threat, prompting this evacuation. Updates will follow,â€ the school posted on their official website. North Dakota State University in Fargo has roughly 14,000 students on campus. At a third university, Valparaiso in Chicago, administrators posted a campus-wide alert about â€œan unspecific threat to campus was made through a graffiti message alluding to dangerous and criminal activity alleged to be carried out during the chapel break period.â€ The chapel break period is at 11.15 a.m. and passed without incident. (RT News)]]>