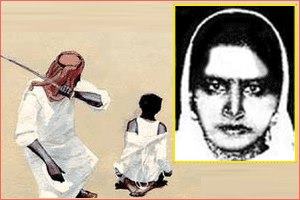 A young Sri Lankan woman was beheaded with a sword last Wednesday in a Dawadmi, a small town in Saudi Arabia. Rizana Nafeek was found guilty of murdering her employers’ child – a crime she vehemently denied until death.

Rizana is not the only migrant worker to have been executed in Saudi Arabia – at least 27 were executed in 2010 and more than 45 foreign maids are facing execution on death row according to Amnesty International. Rizana’s deadly fate highlights the plight of migrant workers all around the world. Like many migrant workers’ Rizana’s story began when she left her home country Sri Lanka in 2005 for Saudi Arabia to work as a housemaid where she could earn enough money to support her relatives. In the same year she was arrested, charged, convicted and sentenced to death for murdering her employers’ four-month-old son, Kayed bin Nayef bin Jazyan al-Otaibi. Rizana said the child choked on milk and died. The child’s family believed Rizana had strangled the child after attempting to bottle-feed him. Once arrested Rizana battled with an unjust Saudi legal system. “Defendants are rarely allowed formal representation by a lawyer and in many cases are kept in the dark about the progress of legal proceedings against them,” Amnesty International said. The Sri Lankan government and human rights organisations campaigned for Rizana to have a fair trial. Rizana did not have legal representation prior to her trial – and – she was physically assaulted and forced to sign a confession under duress, which she later retracted. Under international law Rizana at the age of 17 was too young to receive the death penalty. As a signatory to the Convention on the Rights of the Child, Saudi Arabia is prohibited from sentencing a child under the age of 18 at the time of the alleged offence to death. It is unlikely Saudi Arabia will be subject to any stringent sanctions for violating international law, which led to the death of a young woman. Rizana’s birth certificate showed she was only 17 when the murder allegedly took place, while her passport shows she was 23. However it is alleged her passport was falsified to enable her to enter the country and work as a housemaid. It is claimed her employment agency were aware that she was 17 but purporting to be aged 23. Like many agencies working with migrant employees they dehumanize workers and view them as cheap labour and mere commodities. 8.3 million migrants are legitimately working in Saudi Arabia with many more working illegally. Many workers come from Bangladesh, Sri Lanka, Indonesia and the Philippines in search of a better life only to be subject to abuse and oppression while isolated from friends and family in a foreign land. There are 52.6 million people employed as domestic workers all across the world and at least 15.5 million of them are children under the age of 18 according to a report by UN International Labour Organisation (ILO). Although it is thought this figure may be closer to 100 million – but it is impossible to know, as many work illegally. Workers are subject to harsh condition in countries, which do not have adequate Labour laws to uphold worker’s human rights. In a review of 72 countries’ labour laws, the ILO found that 40 percent of countries did not guarantee domestic workers a weekly rest day, and half did not limit hours of work. To assert their rights migrant workers are forced into a losing battle with their employers. Recurring problems include, harsh work conditions, food and sleep deprivation, forced confinement, under payment or none payment, stolen passports and employment contracts with no get-out clause. Human Rights Watch has stated that physical and sexual abuse of migrant workers is a prevailing concern with many workers subjected to slavery. To stamp out the abhorrent abuse of migrant workers a global standard of domestic worker conditions for all countries needs to be enshrined in law. Once established such laws needs to be enforced with stringent sanctions imposed. (The Independent)
]]>