<![CDATA[A Statement by the Asian Human Rights Commission on the occasion of the Human Rights Day 2012. <strong>SRI LANKA: AN Overview of the state of human rights in Sri Lanka in 2012 In previous annual reports, the Asian Human Rights Commission has documented Sri Lanka’s rapid fall into a dictatorship under the executive presidential system. This process has now been completed. There are violations written into the basic structure of its constitution, which was initially based on Sri Lanka being a republic and a democracy, recognizing the separation of powers between the executive, a legislature and judiciary, with the rule of law as its foundation and made on the basis of sovereignty of the people; now the legislature and the judiciary have been subjugated to the executive, through the 1972 and 1978 Constitutions. 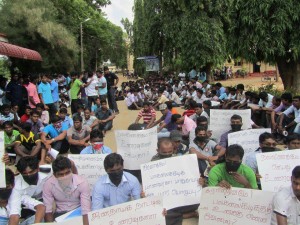 The executive president has now taken control of the legislature and the judiciary, and thereby reduced these two formerly independent branches of government into branches of the executive. This transformation is so complete that the principles of separation of powers and the rule of law can no longer be operated in any rational manner. The executive president is the sole and the direct controller of every aspect of governance, and all institutions are now expected to operate under his direction and according to his wishes. The direct result of this transformation is that now no justice is possible in Sri Lanka. Under the structure of governance, functioning under the direction of the executive president, there is no protection for the dignity and liberty of individuals. Individual freedoms are completely suppressed and there is no institutional structure for the protection of such liberties. Citizenship in Sri Lanka now only refers to one without any of the human rights. Individuals are being made into digits of a system in which the controller is the executive president. No one is outside the arbitrary control of the executive president, including the Chief Justice of Sri Lanka herself. All judges in the time to come will be under the total control of the executive president. The only permissible decisions that the judges of Sri Lanka will be able to make will be those that the executive president allows them to make. Anyone who even slightly deviates from this path is likely to be removed from his or her position immediately, the same way that chief justice is being dealt with now. Under these circumstances, fundamental human rights, though enshrined in the constitution, are without any effective protection. The protections that arise from Sri Lanka being signatory to international conventions in human rights have now lost significance. The people of Sri Lanka have been watching these transformations helplessly. The international community is totally oblivious to these transformations. For many decades, the UN Agencies, the powerful countries, and the international community at large, thought the sole problem in Sri Lanka was the ethnic conflict, or the minority issue, and failed to recognize the terrible constitutional crisis that the political system as a whole was facing since 1978. There were those who pointed out this situation in a fuller picture, and this included the Asian Human Rights Commission. However, such warnings were not taken seriously. Now, when the collapse is becoming obvious, there are some expressions of concern, but these have come too late, and even now the recognition of the total transformation of Sri Lanka into a dictatorship is not being grasped at all. The consequence is that the people of Sri Lanka now have to face this situation alone and even someone in as high a position as the Chief Justice of Sri Lanka has no choice but to face the consequences of the total absence of respect for rules. It will be said in the future that at the point when Sri Lankan democracy sank like the Titanic no one came to her rescue. The most frightening spectacle is the rise of the Ministry of Defense as the total controller of the lives of Sri Lankan citizens. The para-military forces, such as the Special Task Force (STF), the intelligence services, and the military are now intervening into the lives of people in the North and East as well as the people of the South. Not even the prisoners are outside their control and direct intervention. All these forces work outside the law and enjoy total impunity. The possibility of any credible investigation into violations of rights has come to an end. In the absence of such investigations, the possibility of prosecutions does not exist and, in any case, the prosecutor – that is, the Attorney General’s Department – is under the control of the new administration of the executive president. The judiciary has ceased to be a separate branch of governance and is now under the control of the executive president. When even the Chief Justice is without legal protection, there is hardly any need to speculate on the fate of ordinary folk. Forced disappearances, extrajudicial killings, rampant torture, denial of protection from illegal arrest and illegal detention, the denial of fair trial, the suppression of freedom of expression, publication, and association, are all entrenched, and electing a government by a free and fair election is no longer a possibility. In short, all the rights enshrined under the UN International Covenant of Civil and Political Rights (ICCPR) are being violated and there is no effective remedy, as required under Article 2 of that Covenant, for any of the rights. The final culminating issue is the government initiative to impeach the chief justice. This was a direct retaliation to judgments relating to the Divinaguma Bill, which the three judges of a bench presided over by the Chief Justice had held to be in contravention of the constitution. After threats of impeachment, 117 members filed an impeachment motion containing 14 charges, all of which the Chief Justice denied. Later, 11 members, of whom 7 are from the government, have been appointed to be the Parliamentary Select Committee (PSC). The impeachment procedure is contained in article 107 and select committee resolutions are found in article 78. Many authorities have pointed out that this procedure does not provide for impartial investigation of a tribunal, and therefore violates the basic principles relating to an impeachment of a judge. Despite such challenges, the impeachment proceedings are continuing. The government approach appears to be that legality or illegality of the impeachment is irrelevant. The executive can request the parliament to commit an act which may be illegal, and on that request, parliament must oblige. The core argument is that whatever the executive orders has effect of law. This is the same position that Otto Adolf Eichmann took about the orders of Hitler. The full report will be available for download at http://www.humanrights.asia/resources/hrreport/2012/ahrc-spr-011-2012.pdf/view]]>