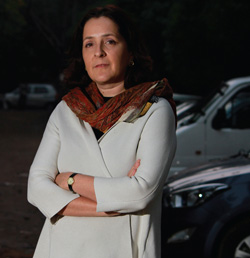 AMONG THE first books to be published on one of the most brutal wars of the 21st century, Still Counting The Dead is an account of the Sri Lankan state’s hostilities with the Liberation Tigers of Tamil Eelam (LTTE). The book attempts, through 11 profiles, to put a human face to the war. Author Frances Harrison, 46, speaks to G Vishnu about the “really problematic role” played by the UN, the horrifying stories told by survivors and the importance of reporting those stories to a wide audience. Why Sri Lanka? There was a story that hadn’t been told, and the one thing I could do to help was to put it out that something awful had happened. What the Sri Lankan government did was say, “We’re not going to have this reported fully. We’re not going to allow journalists or independent eyewitnesses into the war zone” and it became a sort of black hole in history and journalism. I thought they shouldn’t get away with everything. As journalists, we maintain a certain distance. How was it to hear these tragic accounts? The few people who have done interviews with survivors are marked by it. You cannot grasp how shocking it is. I would wake up in the morning clenched and angry. The indifference overwhelms you. In 2010, there was no UN panel report. There was no Channel 9 film, Killing Fields. It was very lonely. The classic response was, “You must have got something wrong, it can’t be like this.” I was very upset after interviewing the nun Sister Ignatius. She was probably the first person I met who really grappled with the moral issues herself, not in the religious way, but in the sense of right and wrong. She talked frankly about the Tigers and what they did. She had gone voluntarily to do something she knew would be awful and was nearly destroyed by that. She was still fragile. She ran away at the end of the interview and left me alone in that church, and I was shaken.

Still Counting The Dead Frances Harrison Granta 272 pp; Rs 450 Can you talk about your equation with Puli, the spokesman for LTTE? There is a lot about Puli that I don’t know yet. Contact with some normalcy outside was important for him. I knew rationally that he wasn’t going to make it. A person whose days are numbered, it’s like a dead man walking. I was upset when he was killed, but it wasn’t a shock. I had to piece together bits of his earlier life. LTTE guys kept their families secret — I heard he got married during the peace process, but I never met his wife until later. I was very shocked to learn she didn’t have a photo of him. So I contacted a Sinhalese photo journalist who was in exile too. He was quite impoverished at the time, but very sweetly blew up a photo, printed and posted it to me, because I didn’t dare give her contact out. Then I posted it to her and said, “You realise this photo has come from a Sinhalese journalist, not a Tamil one.” She was actually quite proud that Puli had these friends who were foreign and not all Tamil. What about the propaganda war that was being fought? The worst flak I’ve had is from the Tamil nationalists. They’ve said that I’ve depoliticised the story, that I’ve taken the Eelam struggle out of it, that I’ve projected everybody only as victims. I didn’t set out to do a political analysis but to put a human face on these statistics, and on the people branded as terrorists. When you start converting human stories to political struggles, you start dehumanising them too. This was written for a wider audience — people who go on holidays in Sri Lanka ought to know what happened. The UN left northern Sri Lanka when half the population depended on their aid. Did the international community not know what was coming? I don’t think anyone knew how dreadful it was going to be. But if you read the WikiLeaks papers from 2009, you see increasing desperation as the situation gets out of hand by May. The UN played a really problematic role. It’s clear that they had data on casualties. But they tried to slant everything. In the post- 9/11 world, those defined as terrorists do the bad things and they tried to blame the LTTE for everything. They had direct evidence in this case of the army shelling and killing two-thirds of the people reported dead. They wanted to suppress that. For example, to the very end in the annexes in the Petrie Report, it says that there were 18,000 dead and 36-37,000 injured. That’s a casualty number they had at the time and never mentioned. It could be wildly untrue and exaggerated, but it’s being sent out by people risking their lives to send you that information. It’s only three-and-half years later that it even surfaces, that too at the end of an annex of a report they didn’t want to publish. Someone leaked some population data from August 2010 to me, which indicates that there are probably about a 1 lakh people missing in the Mullaitivu district alone. That’s a war bank database they’re sitting on. If international agencies are aware of this data, it’s not rocket science to compare the previous number with this one. How come they haven’t done that kind of subtraction? How come this is just accepted? It’s broken down by village, it’s detailed. I’m not saying all those people are dead. Many must have come to India. But how many do you think were able to come back to Tamil Nadu within one year after the war? Ten thousand at most. Can’t give more visas than that without it showing. You have 11,000 detainees. Perhaps they didn’t include those. A few people who may have moved to the south or the east. But you still have 1 lakh minus those people. G Vishnu is a Correspondent with Tehelka. vishnu@tehelka.com]]>