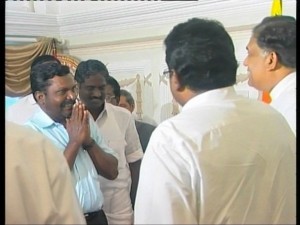 VCK founder Thol. Thirumavalavan and his supporters were held on Friday while protesting outside the Sri Lankan Deputy High Commission against the visit of Sri Lankan President Mahinda Rajapaksa to India.

The Lok Sabha MP and his supporters were detained when they created a road-blockade after being prevented from staging a protest, police said.

The arrival of Rajapakse for a Buddhist function in Madhya Pradesh had drawn criticism in Tamil Nadu, with UPA member DMK and MDMK strongly opposing it.

DMK chief M Karunanidhi has opposed his visit while MDMK supporters, led by its founder Vaiko, staged a black-flag demonstration against the Lankan leader before being held at the Madhya Pradesh-Maharashtra border.

The parties hold Rajapaksa responsible for alleged atrocities on Tamil civilians in the last leg of the war between the Sri Lankan Army and LTTE in 2009 . (PTI)